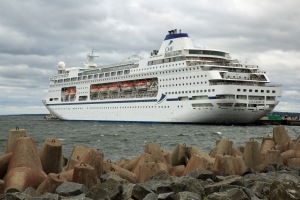 During our extended 5-months in UK, we spent many weeks with my dad and toured extensively throughout Scotland and England. However, we had another objective and that was a return to cruising, after a 2-year hiatus. Since we started cruising in the late 90’s, this was our longest gap between cruises.

Based on our experiences on the 2015 World Cruise, we will never cruise with Princess again, so read on to discover how we opted for Cruise & Maritime Voyages (CMV).

The cruise departed from London Cruise Terminal, Tilbury on September 13th, and we were given a boarding time of 11:50. For the trip to Tilbury, we booked a private hire car from Addison Lee, who provide an excellent, cost effective service. I completed an online reservation a few weeks prior to the cruise, for pick up at 10:00. About 15 mins prior to pick-up, we received a text from the driver, advising he was enroute. He arrived shortly before 10:00 with an almost new Ford Galaxy, a perfect choice for 2 adults and tons of baggage. Costing UKP 55, it was only a few pounds more than going by train.

We arrived at the Cruise Terminal about 11:00 to find the wrong ship alongside. Very interesting, as I thought they only had 1 berth!!! Entering the drop off area, the mystery was solved – due to last night’s storm, London Port Authority shut down all marine traffic on the River Thames. Our ship was still out at sea, with ETA about 15:30 and boarding commencing at 18:00. OMG! we have over 7 hours before boarding the ship. 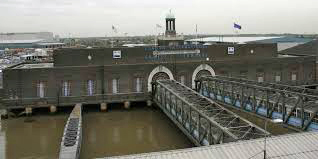 The London Cruise Terminal is a converted cargo shed, which can best be described as old, dilapidated and spartan; however, the CMV shore staff did an excellent job, on very short notice. They hired a bus to provide continuous service to/from Lakeside Mall, the closest mall. With lots of carry-on baggage, it wasn’t an option for us, so we opted to hunker down at the terminal. I found a electrical outlet for the laptop, so spent hours creating posts and tripadvisor reports. The staff provided tea/coffee and ordered sandwiches and crisps from the local ASDA. The ship docked about 15:30 and quickly commenced disembarkation, then to my surprise, boarding started shortly before 16:30. One gangway had disembarking passengers, while the other had boarding passengers. Very impressive turn-around.

Departing 8 hrs late at 23:00, I knew we couldn’t reach our first port of call in Copenhagen, especially with the storm remnants still pounding the North Sea. Entering the cabin, we received the expected note stating Copenhagen is cancelled and on departure, we are bound for Warnemunde (Germany). 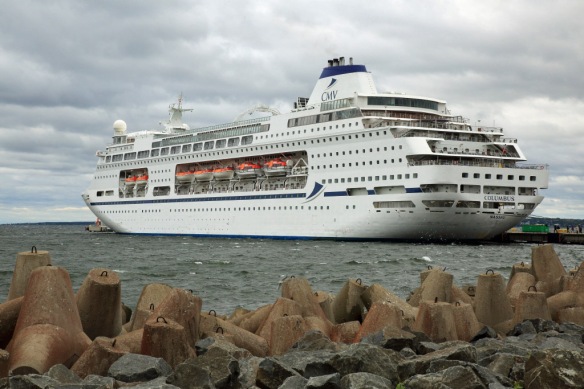 Columbus Alongside at Tallinn

Launched in 1988, the MV Columbus started as a Sitmar newbuilding in Saint-Nazaire, France. Although she floated out (launched) as Sitmar FairMajestry, P&O Cruises purchased Sitmar before she entered service. Therefore, she entered service as the original Star Princess, with her claim to fame being a 1995 grounding in Alaska. Her subsequent names were:

She was purchased by CMV in 2017 and on completion of a drydocking/refit in Singapore, she commenced service in April/May. 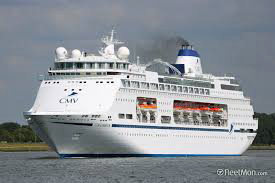 Although an older ship, it is well maintained and spotlessly clean. Virtually the same age as the Sea Princess, it was vastly better maintained than the Princess ship. I also noted seamen out slapping on more paint in every port.

We consider the pax experience on CMV to be that of a good budget cruise line, but the highlight was definitely the 2-days in St Petersburg. The company and crew did an excellent job of managing the turmoil in Tilbury. The ship is spacious, with the exception being the buffet, which we only visited twice, but found it has limited seating at busy times. All in all, it was a reasonable cruise.