After cancelling Copenhagen, our first port of call became Warnemunde, the port for Rostock, Germany.

Alongside for about 16 hours, we could easily visit many of the local attractions, but Berlin, only 150 miles away, was really tempting. As a child, Judi lived in West Germany, while her dad was stationed at an RCAF base, but Berlin was off-limits, being 100 miles inside East Germany. For me, it was my first ever visit to Germany, so we both wanted to see Berlin.

We opted for a ship’s tour to Berlin, a really long 13 hour day, most of which we spent on the bus, but it was worth it.

After a leisurely breakfast we wandered ashore, boarding the bus, which departed the port about 09:45. Almost the entire 150 miles was on the Autobahn, which quickly dispelled my first German myth. Remembering the days of no motorway speed limits in UK, but having lived with restrictive BC speed limits for almost 40 years, I looked forward to experiencing the reputed no speed limits on the Autobahns. Expecting to complete 150 miles in under 2 hours, I was surprised to see a 60 mph sticker on the back of the bus. In addition to the bus being limited to 60 mph, the motorway also had speed limits prominently posted and they weren’t any different than the limits at home. Traffic was crazy, so the trip to Berlin took well over 3 hours.

We approached Berlin on Hwy 111, through what used to be the French sector, rounding the Main International Airport, before heading to Bellevue Palace. 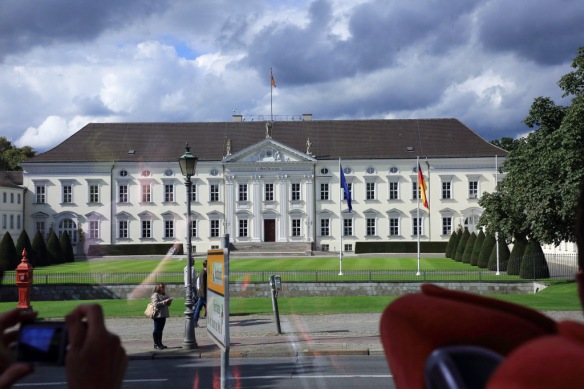 A neoclassical palace, on the banks of the River Spree, this the official residence of Germany’s President.

We then turned into Berlin’s huge and most popular inner-city park – Tiergarten, which comprises about 520 acres of trees, lawns, rose garden, lakes, etc. Of the current 35,000 trees, only 500 of them survived the Allied bombing in WWII. The park has existed for over 500 years. Exiting the park, we should have stopped at Brandenburg gate for a walk; however, a downtown protest had closed numerous roads.

The guide advised we would return, and the driver was trying to find a route to the restaurant, not blocked by the protests.

Located inside the large roundabout on Hwy 2, in Tiergarten Park, Victory Column commemorates the Prussian victory in the Danish/Prussian War of 1864. The monument is about 220 feet tall and has an observation gallery, accessible via a spiral staircase with 270 steps. At the top is a gold statue of Victoria, the Goddess of Victory.

After crossing the river again, we passed Berlin’s Central Train Station, which was rebuilt in 2006, is reputed to be Europe’s largest station.

Continuing NE on Invalidenstabe, we crossed into the East German side, passing Invaliden Park, which originally dates from 1843. At about 6 acres, it was the gardens of a house built for the wounded soldiers from the Prussian Wars. Completely redesigned from 1992-97, the park is now an urban square that commemorates the Berlin Wall, which was located nearby. 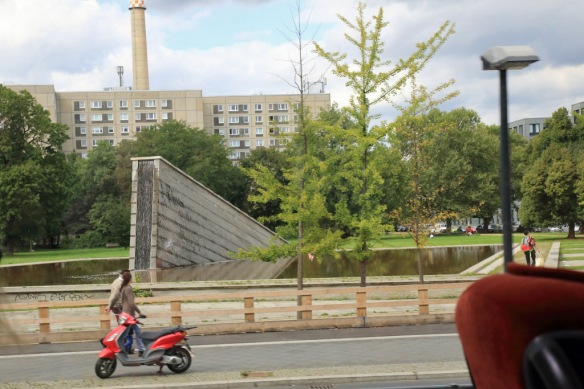 The bus driver couldn’t find a route to the restaurant, so he dropped us about a block from the river, giving us a pleasant 600 yd walk to Nolles restaurant. 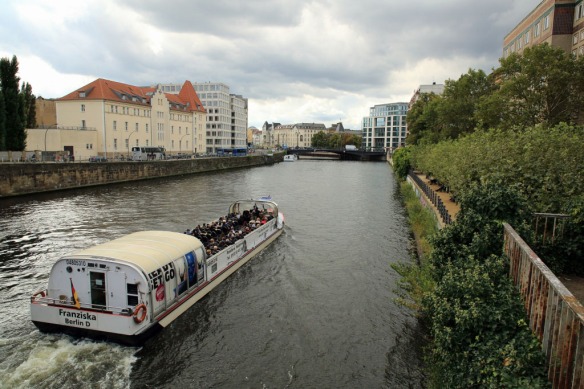 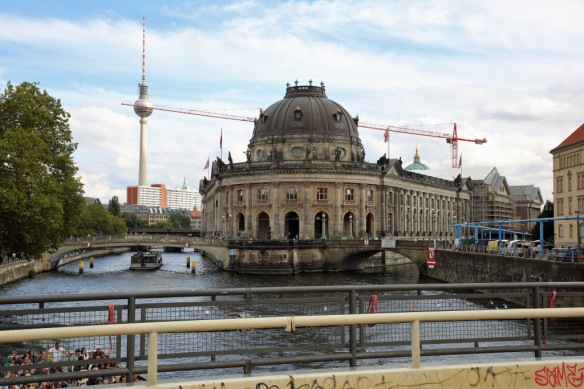 Bode Museum, one of many museums on Museum Island 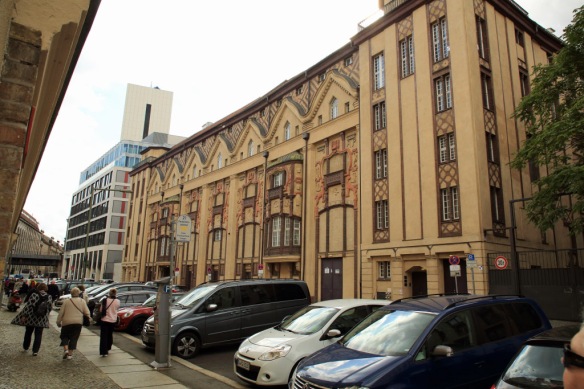 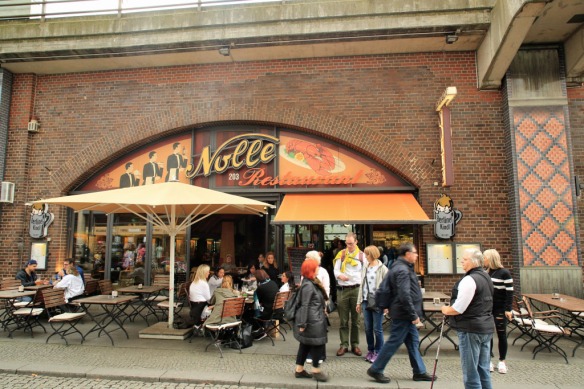 Nolle Restaurant where our tour stopped for lunch

A fairly large restaurant located under the train tracks, where you can eat inside, or out front. When seated, we received a complimentary beer or wine, before lunch was served “Family Style.” Each table of 8 received a large plate of each dish, which included – meat balls, sliced pork, chicken, sausages, 2 types of potato, sauerkraut and vegetables. The portions were huge, and all dishes were tasty and served piping hot. It actually was an excellent lunch. 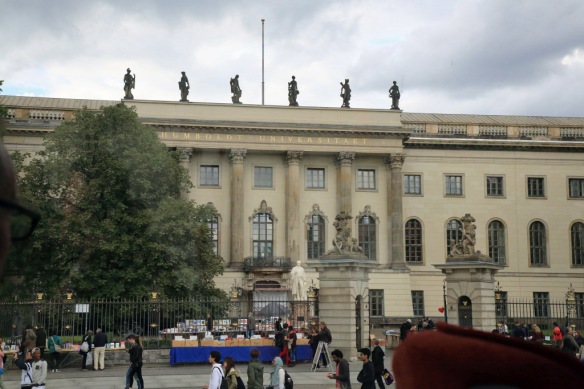 Humbolt University on Hwy 2, dating from 1811

Returning to the bus, the demonstrations were over, so we headed down to Hwy 2, then onto Museum Island. This entire area has numerous older buildings, of varied architecture. 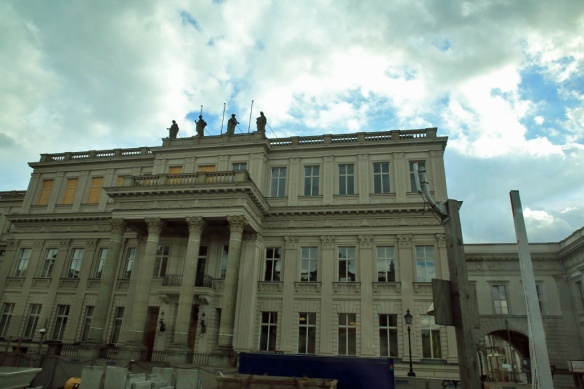 Kronprinzpalais, home of the Monarchy before they were abolished after WW I

Altes Museum, with Lustgarten in foreground, which was originally the Palace gardens 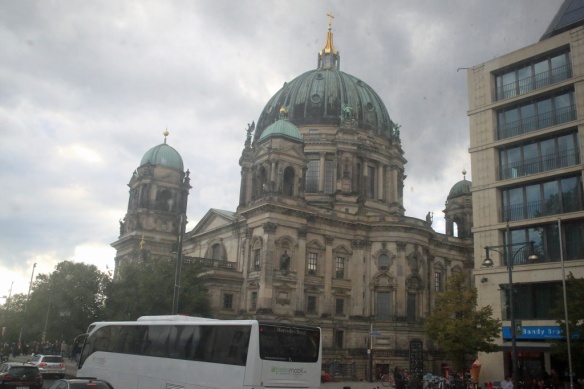 Berlin Cathedral, which was the last of the older buildings

Continuing along Hwy 2, we passed Alexander Plaza, the home of the Berlin TV tower.

We were back into the old East Germany side, passing some classic Soviet style apartment blocks along Karl Marx Avenue.

Passing Teacher’s House apartments, we headed along Karl Marx Avenue, which is a wide, modern multi-lane thoroughfare, with huge Soviet style apartment blocks on both sides. 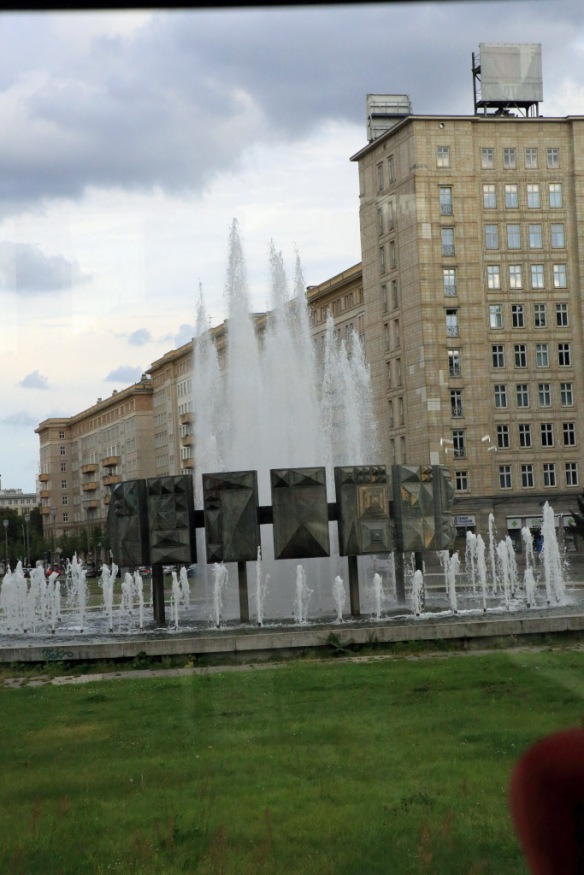 Our next point of interest was a remaining section of the Berlin Wall, which is undoubtedly the highlight of most visits to Berlin. The East Side Gallery is a 3/4 miles long remnant of the Wall, that is now a tapestry for local artists. 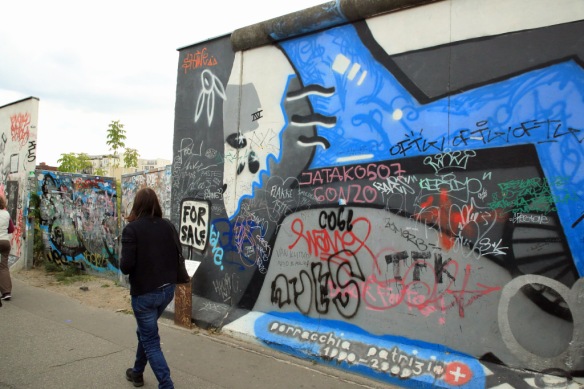 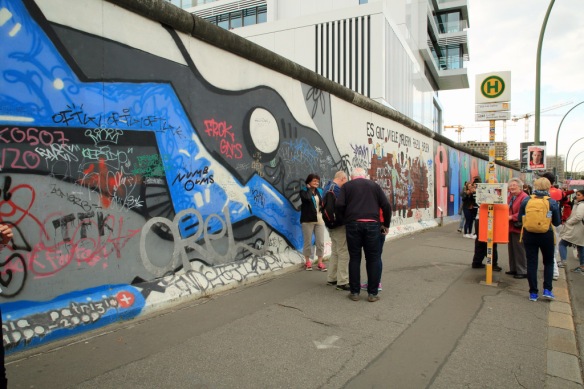 The section we visited runs along the banks of the River Spree, which was the actual border. Many will remember the scenes of the wall coming down in November 1989, but how about the construction start in 1961. Billed as a barrier to keep out Westerners, it’s intent was to stop migration to the West, especially the brain drain, as before 1961, it is estimated 20% of East Germans crossed over to the West.

On day 1, it started with barbed wire, quickly evolving to a single concrete wall. However, the wall didn’t stop defections, so the Wall grew to a complex multi-level border fortification, with a killing zone. For history of the wall, visit the memorial website by clicking here. 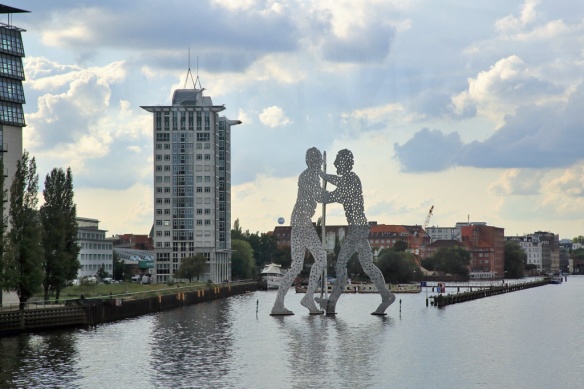 The opportunity to disembark from the bus and walk along the wall was most welcome. Re-boarding the bus, we crossed the river again, bound for Treptower Park, a park along the river, which contains the Soviet War Memorial. 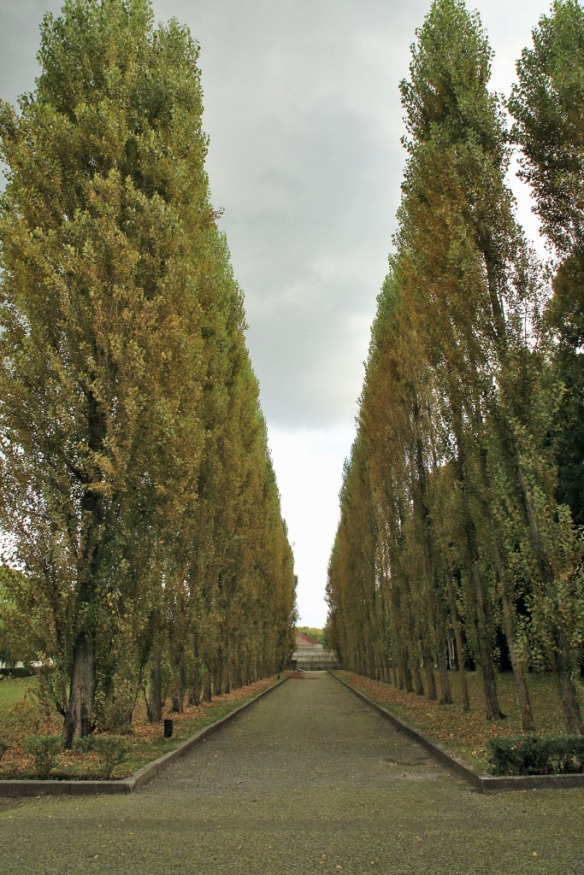 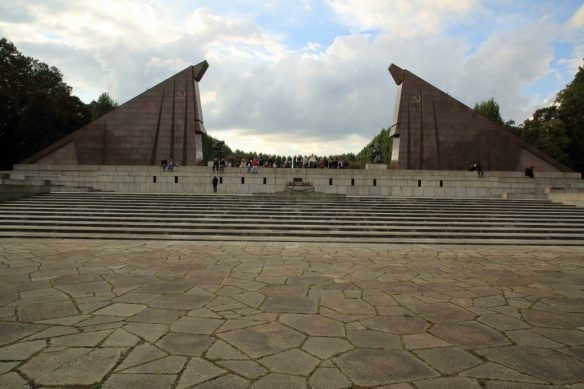 A combined memorial and military cemetery built in 1949, it commemorates 7,000 of the 80,000 Soviet troops that died during the Battle of Berlin, in April/May 1945.

Departing Treptower Park we crossed back into West Berlin, passing through one of the more run down areas, bound for our next stop at Checkpoint Charlie, a border crossing in the US Sector.

Looking down Friedrichstrabe at Checkpoint Charlie 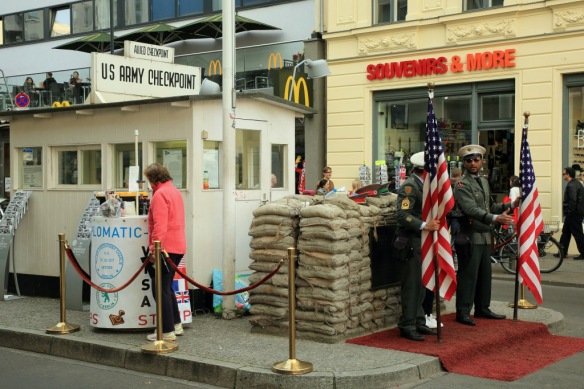 Checkpoint Charlie looking at East German side, which has been completely rebuilt

Enroute to the Brandenburg Gate, we drove through Potsdamer Plaza , a modern mega mall shopping and office complex, before passing the Holocaust Memorial.

This would have been a very moving experience, but unfortunately, we didn’t have enough time for another stop. The Holocaust Memorial covers almost 5 acres and has 2,711 concrete slabs of varying heights.

By the time we returned to the Brandenburg Gate, the sun was rapidly approaching the horizon, and with less crowds, the timing was perfect. The Brandenburg Gate, built by Prussian King Frederick William II, is a neoclassical monument completed in 1791. 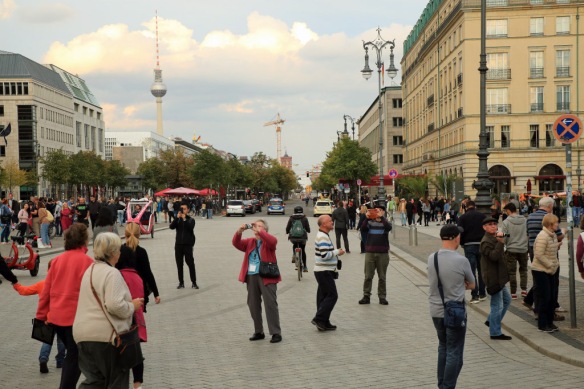 Departing the Brandenburg Gate, the bus driver required a 1/2 hour break, so we headed to Gendarmenmarkt, a public square with a number of older buildings. 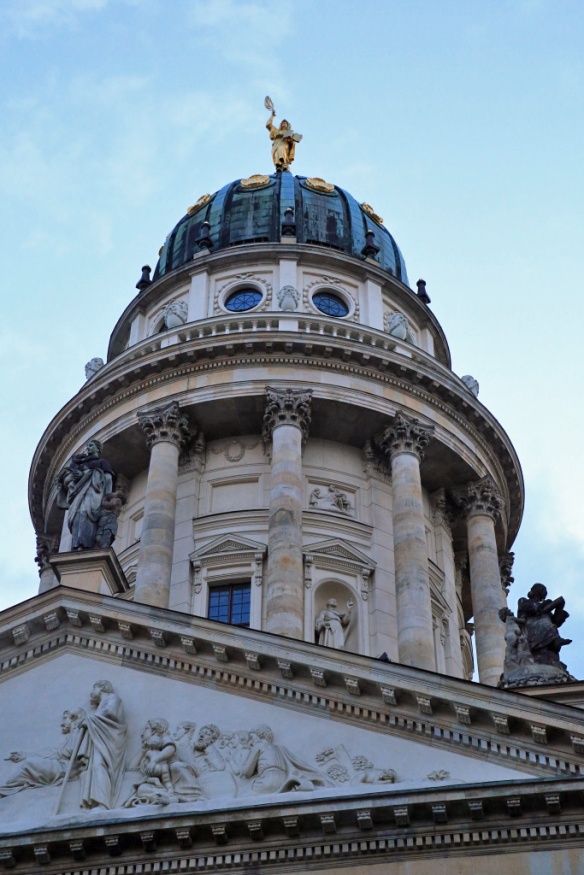 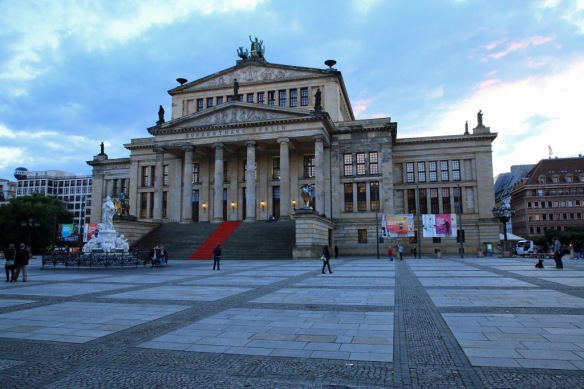 This concluded our tour of Berlin, so on re-boarding the bus, we were bound for Warnemunde. Light was fading rapidly, so by the time we passed the airport, it was already pitch dark.

To prevent dehydration on the return, the driver procured a case of hopped beverages, which the guide sold on his behalf. Most didn’t partake, but our group at the back of the bus certainly did. Our guide was a really interesting young chap, who chatted with us during the entire return. He started as an investment manager in Munich, advising that in his mid 20’s he had a decision to make – continue and be a multi-millionaire, but most likely dead in his 30’s, or change careers. He moved to the Rostock area, being a tour guide in the summer and designing luxury hand bags in winter. He showed us some of his creations, which had the ladies drooling.

We returned to the ship about 22:30. A very long day and although we spent most of it on the bus, it was a most enjoyable and informative look at Berlin.

Next – a walking tour of Old City Tallinn, Estonia