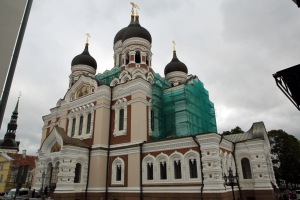 After a long day visiting Berlin, we enjoyed a relaxing, full day at sea, before docking in Tallinn, the following day about 11:00. Perfect timing, as after a leisurely breakfast, I wandered up to the Sun Deck on a rather blustery day, to watch the arrival.

In Tallinn, we booked a 5 hr city highlights and Old Town Walking Tour with Alla Tours, the same company we are using in St Petersburg. Our group of 5 passengers met our excellent guide and driver outside the dock gate, which was the start of an exceptional tour – vastly superior to the 50 seat tour bus the ship provides.

This post covers the city drive portion and the following post will cover the Old Town walking tour.

Departing the ship, we took the short walk to the dock gates, where we met our 3 other passengers and the Alla Tours guide and driver. Unfortunately, I can’t remember our guide’s name, but her English was exceptional and she was a wealth of knowledge, providing an almost continuous commentary during the 5-hour tour. The tour commenced with a city drive, followed by the Old Town guided walking tour. Enroute to the first stop she provided some local history.

The Republic of Estonia is one of 3 former Soviet Republics at the top of the Baltic. With a population of 1.3 million, it has one of the smallest populations in the European Union. It is also a member of NATO. It originally gained independence from the Soviets in 1918, but was re-occupied again in 1940, until the signing revolution provided the mechanism for independence again in 1991.

It has one of the fastest growing economies in the EU, is highly digitised with a highly developed IT sector and their schools rank 3rd in the world. In 2014, they were the first country to schedule online elections.

Tallinn when approaching the port

Estonia’s capital and largest city, with a population of just over 400,000, it has been a recognised city since the 1200’s, but they have records of human habitation going back 5,000 years. The walled “Old City” with cobble stoned streets is a UNESCO World Heritage Site.

Departing the port, our first destination and short walking tour was Kadriorg Palace and Gardens. Completed in 1725 by the Russian Czar, Peter the Great for his wife Catherine I, the Palace is now an art gallery and the gardens a public park.

No time for a museum visit, so we wandered into the park, stopping at the President’s residence and offices.

The residence has no fencing, or other readily visible security measures. We walked from the road, through the forecourt and right up to the entrance. Other than 2 soldiers stationed at the door, there was no security or access controls.

Gardens in Kadriorg Park next to President’s residence

Continuing downhill through the park, we then entered the Palace Gardens, which are immaculately maintained.

Kadriorg Palace & Gardens – built by Peter the Great for Catherine I

Enjoy a small selection of the many photos taken during our walk through the gardens. Again, no time in the schedule for an inside visit. 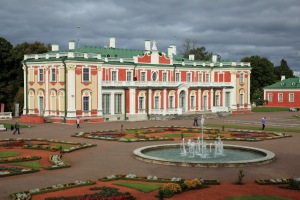 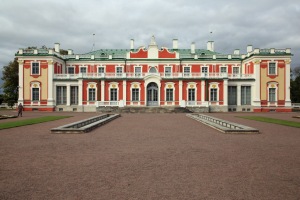 Palace from the front 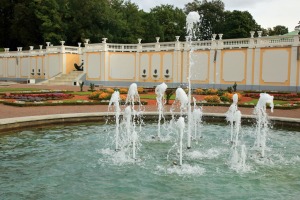 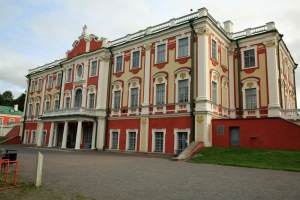 Returning to the mini-bus, we headed to the Song Festival Grounds, which hosts the Estonia Song Festival every 5 years, and played a significant role in Estonia gaining independence.

The festival grounds are huge, with the stage having capacity for 25,000 performers and the grounds holding 200,000 spectators. The bronze statue at the top of the hill is Gustav Ernesaks, an Estonian composer, who is considered the “father of song”. The grounds host the Estonia Song Festival, which takes place every 5-years – next one in 2019. 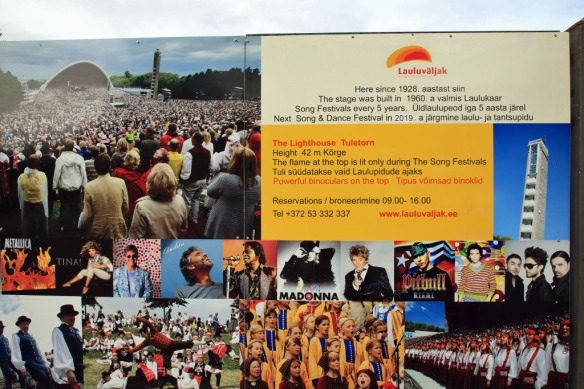 In 1988, the singing revolution started at the festival grounds, which was instrumental in Estonia gaining independence without shots being fired.

Departing the Song Festival Grounds we drove along the waterfront towards Pirita, which hosted the Yachting events at the 1980 Moscow Olympics. Shortly after crossing the Pirita River, we stopped at the ruins of St Bridget’s Convent.

Originally founded in 1407 as a Swedish religious order, the convent was the largest convent in northern Europe. It was destroyed in 1577, during the Livorian War by the forces of Ivan the Terrible. Next door is the modern St Bridgettine Order Convent, which was completed in 2001, when religion was making a revival, in newly independent Estonia.

Departing the convent, we retraced our route along the waterfront, stopping at the Russalka Memorial, located where the Kadriorg Palace Promenade meets the sea. 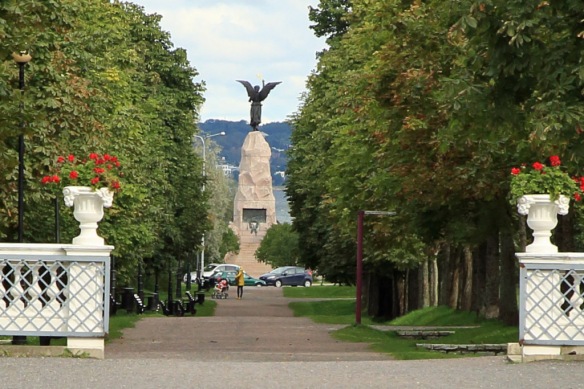 Completed in 1902, the 50′ granite column is topped by a bronze angel and commemorates the sinking of the Russian naval vessel Russalka, or mermaid. The naval vessel sank, with the loss of all hands, in 1893, in the Gulf of Finland.

The granite base of the memorial is laid out to replicate a compass, and the angel points an orthodox cross in the assumed direction of the sunken vessel. Our guide provided a couple of interesting points:

Departing the memorial we drove through the commercial district to Toompea Hill, where we started our 3 hr walking tour of the “Old Town.”