Shortly after docking at London Cruise Terminal, we disembarked MV Columbus, on completion of our 12-day Baltic Cruise. In-bound to the Thames, as soon as we got mobile (cell) service I called Addison Lee for a pick up. Yet again, they provided exceptional service.

Arriving Sept 25th, our flights to Vancouver were on Sept 27th, so we had 1 full day in London. We had already visited many of London’s attractions, but to date, we had never visited the Houses of Parliament, so we booked a guided tour, followed by afternoon tea.

After docking, we allowed about 2 hrs for disembarking, so booked a pick up at 1430. Similar to our previous experience with Addison Lee, Judi received a text 15 minutes before, advising he was enroute and confirming his ETA. On arrival we found out it was a win/win situation, as the driver lives a few miles from the port and got paid for driving into London and we managed to get a ride at very short notice. Exceptional driver, who chatted throughout the entire journey.

Note – no photography is permitted on the tour, so I left the camera at the hotel. All photos were found online, with credit given.

The following day, we enjoyed breakfast and a quiet morning, before heading to Tower Hill tube station. However, due to a security incident, the station was closed. We hailed a cab for the trip to the Houses of Parliament, which they now refer to as The Palace of Westminster.

Purchasing tour tickets in advance is highly recommended, with discounts offered for seniors and booking in advance. Select here to make online bookings.

Pre-reserved tickets are picked up from the Ticket Office in Portcullis House, which is on Victoria Embankment. From the ticket office, it is about 5 mins walk to the Cromwell Green entrance and you should allow up to an additional 40 minutes to clear security. Departing the ticket office, turn right onto Bridge Street and then left onto Parliament Square, continuing until you reach the Cromwell Green entrance. On clearing security, walk around Parliament Square, entering Westminster Hall.

This is the oldest and only remaining original building at the Palace of Westminster. Built in 1097, the great hall was the largest in Europe. Originally built with pillars, creating 3 aisles, the roof was replaced by the current hammerbeam roof in 1393. The hall has experienced many uses in its 900 years: 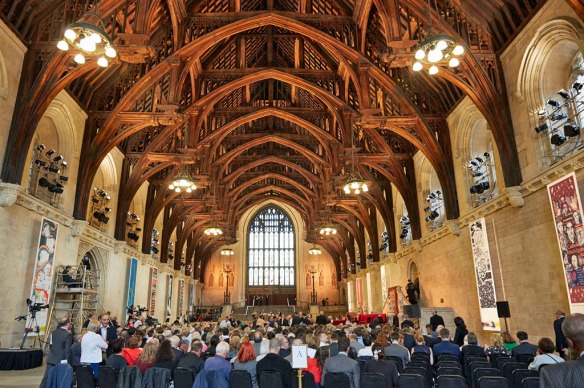 At the appointed time, we met our guide, who led our 90 minute tour. Departing Westminster Hall, we climbed the rear stairs turning left, then climbed an additional set of stairs before entering St Stephens Hall. 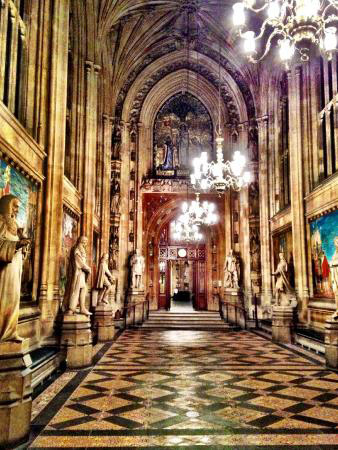 St Stephen’s Hall is lined on both sides by sculptures and leads to the Central Lobby, where we headed to the Lords side and the Sovereign’s Entrance at Victoria Tower.

Victoria Tower in the SW Corner, is the Sovereign’s Entrance

Sovereign’s Gate and Door in the Victoria Tower. This is where the Queen enters during the State Opening of Parliament – bastrong

Inside the Sovereign’s Entrance is the Norman Porch, where we stopped while our guide explained how the Queen enters Parliament.

For the State Opening of Parliament, the Queen arrives in a State Coach, which she disembarks under the Victoria Tower Arch. Entering the building she climbs the 26 stairs of the Royal Staircase to the Norman Porch. Built in the 1800’s, the Norman Porch was intended to house sculptures of Norman Kings, but they were never commissioned. The floor is made from highly polished British and Irish limestone that resembles marble. Two stained glass windows depict Edward the Confessor and Queen Victoria.

We then entered the Royal Robing Room, where the Queen dons the Imperial State Crown and Parliamentary Robes. 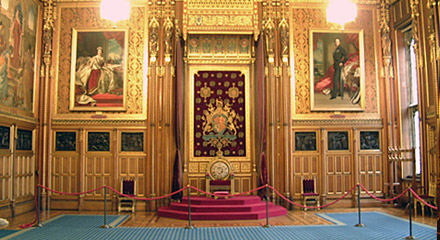 This room’s paintings depict the 7 chivalric values, however only – courtesy, religion, generosity, mercy and hospitality are included. The artist died before completing the final 2 paintings – fidelity and courage. As seen in the photo above, these spots were replaced with portraits of Queen Victoria and Prince Albert. The single throne was installed for Queen Victoria, after the death of her husband Prince Albert.

Departing the Royal Robing Room, we followed the Queen’s route to the Lord’s Chamber, through the Royal Gallery.

Originally called the Victoria Gallery, this is the largest room at the Palace of Westminster. The main processional route at the State Opening of Parliament passes through this very imposing room, which includes 2 large tapestries commemorating British victories in the Napoleonic Wars. 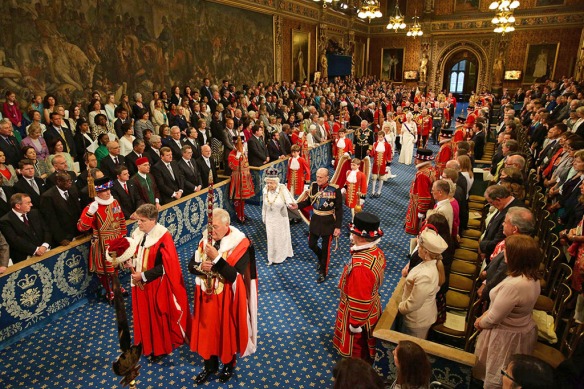 Between the Royal Gallery and House of Lords is the Prince’s Chamber, which is an ante-room to the Lord’s Chamber. 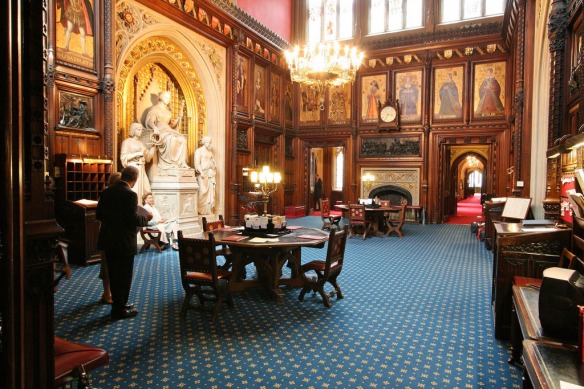 This room inherited its name from the days of the Medieval Palace, as this room was next to the Queen’s Chamber and was used by her eldest son – Prince of Wales. During State Openings of Parliament, a ceremonial basement search starts from this room, which is a response to the Guy Fawkes gunpowder plot of 1605. When the House is sitting, peers collect messages in this room and hold meetings at the octagonal tables.

The next room is the Lords Chamber, or House of Lords. It may also be referred to as the “Upper House”. 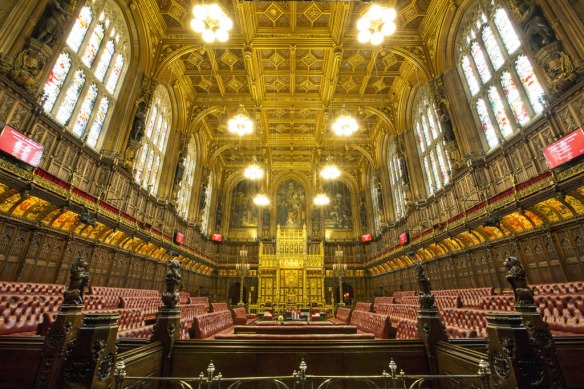 House of Lords – Time Out

House of Lords during State Opening of Parliament – Business Insider

The Lords Chamber was completed in 1847 and was designed to be the grandest room, since this is where the 3 pillars of British society meet – Monarch, Church and Parliament. One end of the Chamber is dominated by the Throne and the gilded surroundings. At the State Opening of Parliament, the Queen sits on the Throne to read the speech. The Throne remains unused at all other times, although Privy Councellors and the oldest child of any serving Member may sit on the steps to observe the proceedings.

On the Lords side of Central Lobby, all seating is red, but on crossing to the Commons side, all seating changes to green. This is a quick way of determining which side of parliament you are visiting. 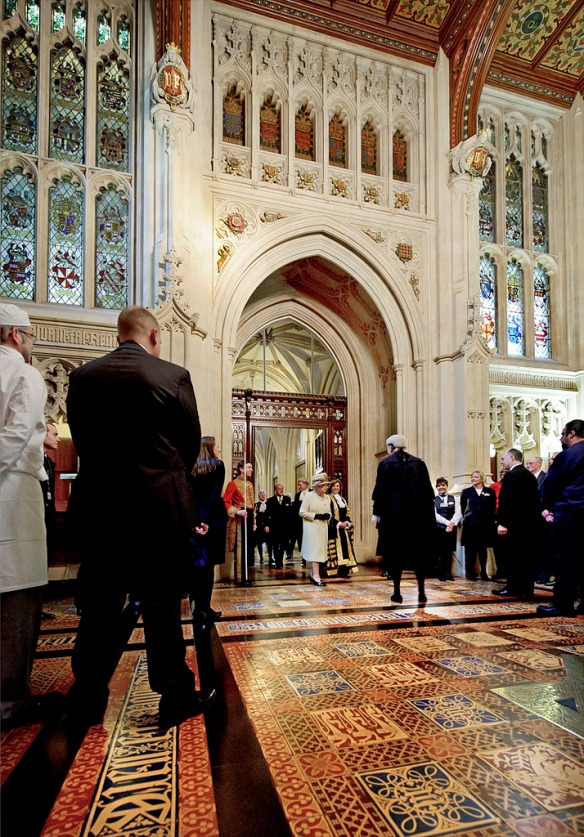 The Peers Lobby and Corridor connect the Lords Chamber to the Central Lobby, which is the mid-point between the Lords and Commons sides of Parliament.

The Central Lobby is an octagon shape with a decorated stone roof. Each of the gaps between the carved ribs of the ceiling are filled with mosaics. Statues of Kings and Queens are situated around the outside.

If you schedule an appointment with your PM, this is probably where the meeting will take place. 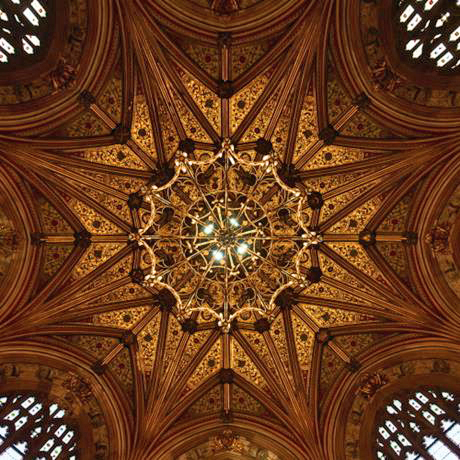 The Commons side is somewhat similar to the Peers side, starting with the Commons Corridor and Members Lobby between the Central Lobby and Commons Chamber.

The Members Lobby is the House of Commons Ante-Room. During WW II, the roof and lobby were extensively damaged. While the walls were rebuilt, the arch leading into the House of Commons is virtually unchanged since the end of the war. This was based on a suggestion from Winston Churchill, suggesting that the damaged state will be a monument to the ordeals of war. This arch is commonly referred to as the Churchill Arch. The room contains statues of former Prime Ministers, including Churchill and Margaret Thatcher. 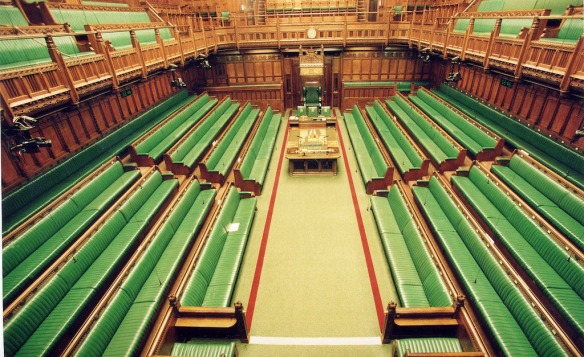 The Commons Chamber or House of Commons was the next stop and we were given an opportunity to sit on the green benches. First thought is that the Chamber is way too small for the number of PM’s, which is currently 650. No individual seats are assigned, so it is first come, first served. Most days, many MP’s are not present, so space is not an issue, but on budget days or PM questions, space is definitely limited. 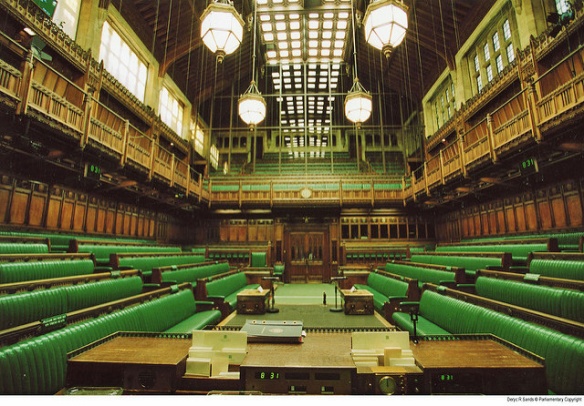 Having never given it much thought, I was surprised when our guide discussed voting procedures. I assumed a simple show of hands, but No!. The MP’s literally vote with their feet.

Surrounding the Chamber are 2 rooms for Ayes and Nays and when a vote is called the MP’s proceed to the room corresponding to their voting intention. 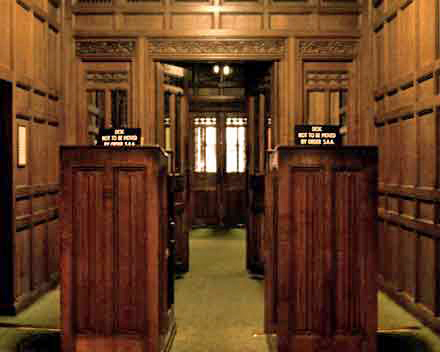 Division Desks in the “No” Lobby – Explore

When a vote is called 2 members, as tally clerks, man the desks in the above photo. To leave the lobby, PM’s pass through between the desks and clearly announce their name, which is recorded by the Tally Clerks.

This was the end of the guided tour, so we returned to Westminster Hall, where we received directions on where to go for the Afternoon Tea. We actually returned to the Central Lobby, where we were escorted down to the Terrace Pavilion. 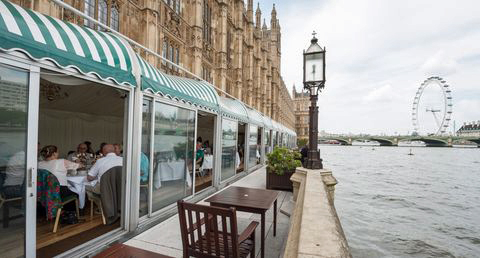 The Terrace was a very comfortable temporary structure, with laminate floor, canvas ceiling and floor to ceiling windows, providing excellent views of the Thames. Unlike our Harrod’s experience, the tables were covered with quality white linen tablecloths and the waiters were very professional and properly attired.

We enjoyed a glass of champagne followed by an excellent afternoon tea. A perfect ending to our visit to Parliament and what was our last attraction on our extended 5-month UK holiday.