As most readers are aware, this is our 2nd World Cruise, having completed the 2015 WC on Sun Princess, R/T from Sydney. Many have asked how Viking compares to Princess, so this post will cover the standards, decor and fittings of our current cabin, and compare them to a comparable cabin on Sun Princess. All comments are our personal opinion and may not reflect the thoughts of others. Comparisons are from memory and reviewing numerous photos from our 2015 cruise. 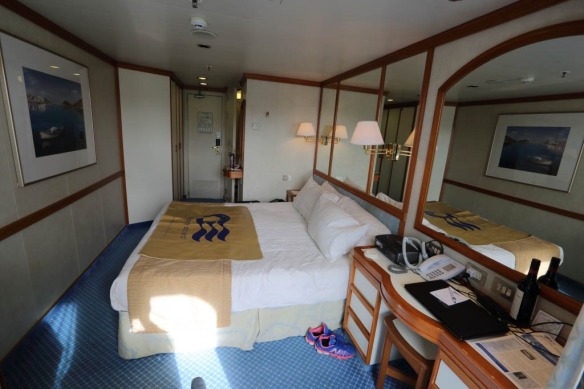 Both cabins were similar category balcony cabins, with the Viking cabin being about 50% larger. While photographs really don’t show the difference, as the Viking bed is longer, the bathroom is almost twice the size and the desk area is larger. Although the Viking cabin is only slightly wider, it is considerably longer.

Being smaller the Princess cabin uses mirrors extensively to give the illusion of greater space. The Princess cabin was basically plain white bulkheads and cabinets. The Viking cabin has extensive use of imitation wood grain and has a padded table. With Viking, the area below my laptop is a make-up area that when raised includes lights and mirror.

The Viking bed is larger, firmer and is extremely comfortable. The Princess bed was just OK and was not even close to being as comfortable as Viking, The 6 pillows are again excellent and memory foam pillow are available upon request. The linens on Viking is also superior to Princess.

For bed lights, Viking have a lamp on each side and an LED light on both sides of the headboard. Also conveniently located on both sides are lighting controls for the main lights and the night light outside the bathroom.

Princess had a lamp on both sides of the bed. 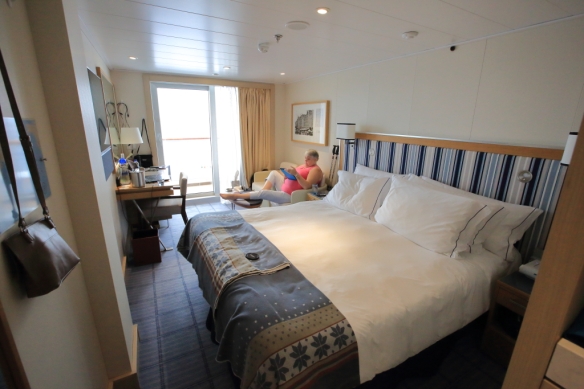 Compared to Viking, the Princess bathroom can best be described as compact, as it is a single person space. The Viking bathroom is huge, has lots of storage, a huge shower, heated deck and tasteful decor.

On Viking, you should never hear the standard cruise ship joke about the shower – soap down the bulkheads, enter shower and do a 360, turn on water and rinse. The Viking shower must be double the size of Princess.

Great modern sink with easy to use tap. At the far left of the counter is the control for the heated floor. Yes, before jumping in the shower, turn on the heat and you step out onto a warm deck.

The huge bathroom easily accommodates both of us.

Winner – Viking (by a mile)

Although the Princess Desk appears larger, it did double as an end table for 1 side of the bed. It also only came with a stool, whereas Viking supply a proper chair. The Viking desk is manufactured with wood grain materials, with an imitation leather top.

The drawer to the right is the fridge, which is huge. It is restocked daily. They also provide a carafe of drinking water twice per day and additional bottles, upon request at no charge.

Below my laptop is a storage area, make-up centre. The desk top lifts to reveal lights and a mirror on the underside, which can be used by the ladies to apply make up, while sitting on the seat.

Princess had one table and the other side was part of the desk. As seen above, on Viking they include both N/American & European outlets and 2 USB outlets, on each side. The small drawer is fairly shallow, but is great for medications and the shelf is perfect for storing my camera. Viking is again finished in wood grain, while Princess was plain white.

Identical lighting controls are provided on each side. The larger switch controls the main lights, while the smaller switch is the night-light located just outside the bathroom door.

Viking provide 2 chairs, but Princess had only 1, as their cabin wasn’t large enough to accommodate another one. Viking also provide a good size table, with a padded top.

Even with Viking providing 3 additional drawers in the closet, starting with the Viking Sun, storage is somewhat limited. Although we managed to unpack everything, it took some creativity to make it all fit. Princess had significantly more drawers.

Although drawer space is somewhat limited, we find the closet more than adequate, Adding drawers to one side has created a short & long side for hanging clothes. They also provide as many hangers as you require. We find that this arrangement works for us very well. I have read complaints from other that they don’t like the location next to the bed, but we have had no issues, so far.

Some may use the excuse that the Princess Ship was older and the Viking ship is less than 3 yrs old. However, I have commanded many 40+ year old ships that were cleaner and better maintained than Princess. On the Princess ship the ventilation system was long overdue for cleaning, as Judi had to replace her breathing machine filters way to often. The balcony door on Princess had no seal on the bottom, so when it rained water poured in, requiring the steward to stuff the area with towels. Apparently so many doors were in similar condition that the ship had no parts.

Our Viking cabin is spotless and everything works.

When we joined Sun Princess back in 2015, it had been many years since we had sailed on a vessel of that class. When we entered the cabin, I still recall the initial reaction – OMG!! the cabin has shrunk. With Viking initial impression was Wow,