This day brings to an end our first week aboard the magnificent Viking Sun. After 7 days of steaming, about 2,300 miles, today we reach the Southern Hemisphere. So does the water in the sink rotate in the opposite direction??? Which direction does it go at the Equator? One of the comments requested some feedback on the meals, so today I introduce a new heading for meals, where I’ll list daily special events and provide feedback on our dining experiences.

Read on to enjoy today’s experience aboard the Viking Sun. 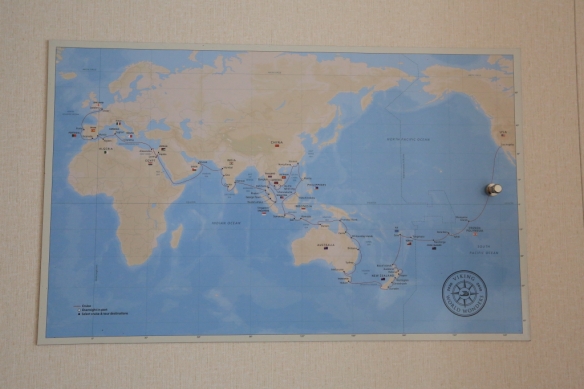 We are now entering the Intertropical Convergence Zone, often called the doldrums. This circles the Equator region and is an area of low pressure (due to heat) and is where the NE & SE Trades winds converge. It is often known for its calm weather, however storms are also possible.

This morning the wind had eased considerably when I went out at 06:00. Started as E’ly about 12 – 15 kts, but freshened to 25 during the day. The slight seas of early morning also picked up to moderate, as the wind freshened. The gentle pitching and rolling continues.

This is a new section today, where I will list any special dinning events and provide feedback on our meals. These are in addition to the multiple regular dining facilities throughout the ship 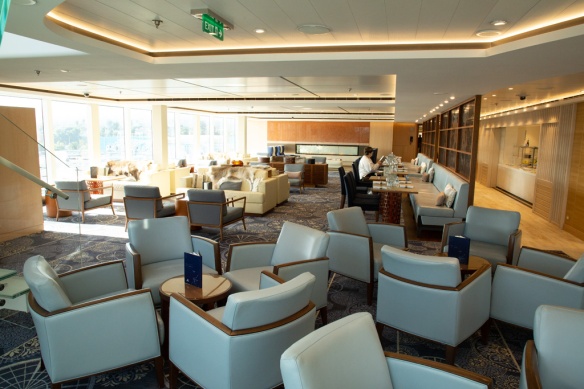 When Judi went for a massage, I headed to Mamsens for lunch, which is a traditional Norwegian Deli. This was my first visit to this facility. It features open faced sandwiches and delectable desserts.

Today’s options were Steak Tartare, Roast Beef on Rye, Smoked Salmon on Rye & Prawns on white. I tried the Prawns & Roast Beef. The prawns included a thin slice of 2″ x 2″ bread, super fresh & crispy lettuce, tomato wedge & 3 huge prawns. The Roast beef was on Rye, with lettuce, tomato & 3 slices of beef cooked to perfection (rare to medium rare). OMG ! everything was so fresh and tasty. Skipped the desserts, but this won’t be my last visit to Mamsens.

For dinner, we returned to our usual section in the MDR, where we already know the waiters. We enjoyed dinner with a couple from Houston, who are aboard until Hong Kong. Judi had the steak, which was cooked a perfect medium and I had the lobster – 1 small tail and another one with Lobster Thermidor. Cooked to perfection and served reasonably hot.

My day started, as usual, completing 14 laps of Deck 8/9. Did an extra couple this morning to make up for the rain cancellation of yesterday. After breakfast, Judi went up to the pool, catching a fair bit of sun in a couple of hours, while I attended lectures at 10:00 & 11:00:

Another Nautical Tradition, which on the British ships was overseen by King Neptune and his court, who boarded for the ceremony. On Viking they use the Norse God of the Seas Aegir.

Aegir – God of the Sea

Always great fun for the spectators, but possibly not so much fun for the Pollywogs, the crew and passengers, who are making their first crossing of the Equator.

Once they pay for their crimes, the Pollywogs transform to Shellback and are rewarded with a glass of Aquavit – at least the pax did, but not the crew. 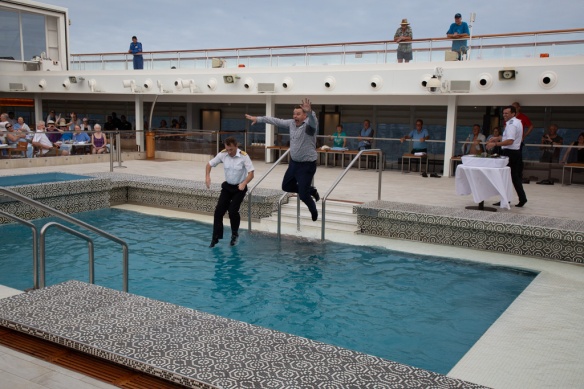 The Ceremony completed with the Captain & Cruise Director taking the plunge, followed by the cruise staff. I will complete another separate post dedicated to the ceremony, with lots of photos.

After dinner, we headed to the Theatre for the 2nd performance from Guest Entertainer Paul Koudouris, who is a vocalist & multi-instrumentalist. Completely different show, focusing more on Country Rock. Yet again another excellent performance. Viking may not have the same quantity of entertainment options as Mega Ships, but what they provide, so far, is excellent quality. Also no need to order tickets, as seats are readily available.

On completion of the show, we joined Dave & Linda for a nightcap in Torshavn, the nightclub. The ship’s band and singers were performing some great music. I even had a Brandy Alexander, probably my first since leaving P&O Cruises almost 40 years ago.