Our first port of call after 8 sea days and about 3,000 miles, since departure Los Angeles. The islanders are in the initial stages of developing a tourist industry, so at present have minimal infrastructure in place,especially for cruise ship visits on a Sunday. They only receive about a dozen cruise ship visits per year.

Read on for a description of the island, some history and our walking tour of the bay.

Located 500-600 miles south of the Equator, it is a small volcanic island, comparable in size to the Hawaiian island of Lanai’i. It is the 2nd largest island in French Polynesia. A rugged and generally mountainous island, it has a steep and frequently indented coastline. The island has no coral reef.

The ship only offered 2 tours:

I researched private tours, but couldn’t find many options. A couple of boats sailing around the coast and a 6 hr 4×4 excursion. Unfortunately, the 4×4 excursion was provided by a tour operator and was only available for their customers. 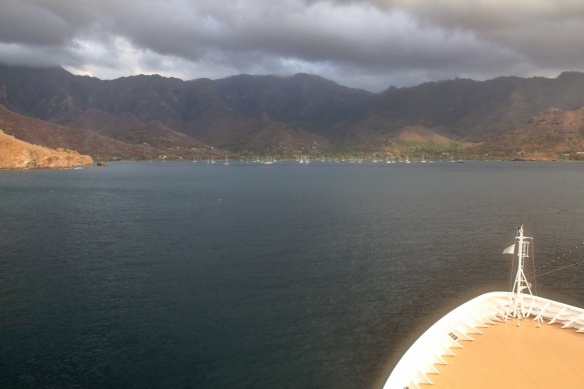 While the arrival into the bay was challenging, due to fresh cross winds, once within the confines of the bay, it was calm, although overcast.

Approaching our anchorage, well before the small boats

Once anchored, they started preparing the tenders for taking us ashore. 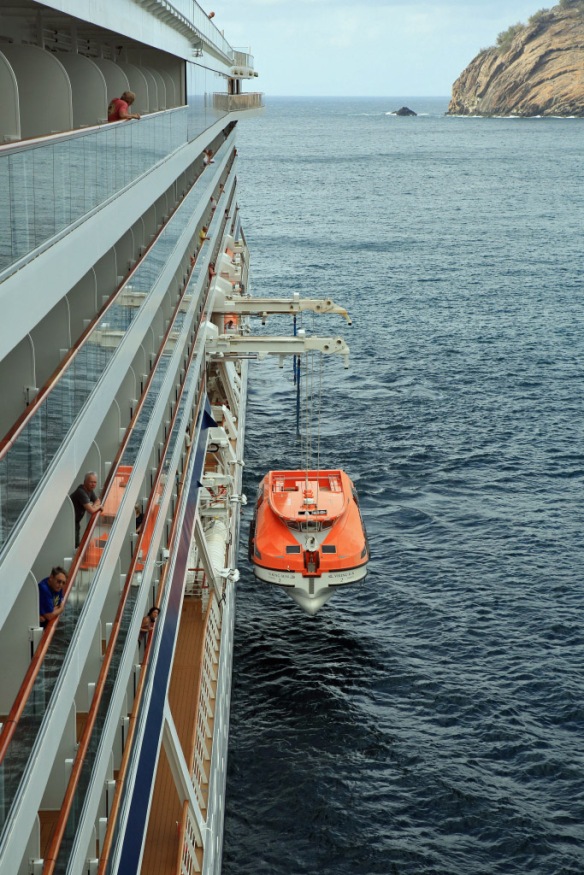 The tendering process was organised with military precision. The Viking Daily provides the meeting time and location for each tour. Being on the 2nd tour, our report time was 09:00 in Star Theatre. On arrival, we traded our tour tickets for tender tickets – Aqua # 2. After a short wait, our tour was called and we were led to the tender platform, where our tender awaited. Our entire group fit in a single tender. Tender capacity is 220.

Our tender at the dock after discharge

The tenders are huge and in addition to twin screws and rudders, they even have a bow thruster. I also noted that Viking uses Deck officers for driving the tenders, while Princess used PO’s & ratings. This is similar to my days with P&O, where only Officers drove tenders. In fact, on Uganda, I was taught by one of the Nursing Officers.

We arrived at the dock amidst a torrential downpour, so they suspended tender ops, keeping us safe and dry, while the thunderstorm abated. Once we disembarked we were met by the local welcoming committee, in fine voice. They regaled each tender, as the pax disembarked.

We bypassed the market, stopping in the tourist information hut for a local map and a leaflet of information on other parts of the island. Also picked up the first postcard for our grandsons.

Since no guides are available, this tour is self-guided, so we set off around the bay to discover the sights of Nuku Hiva, specifically Taiohae Bay. 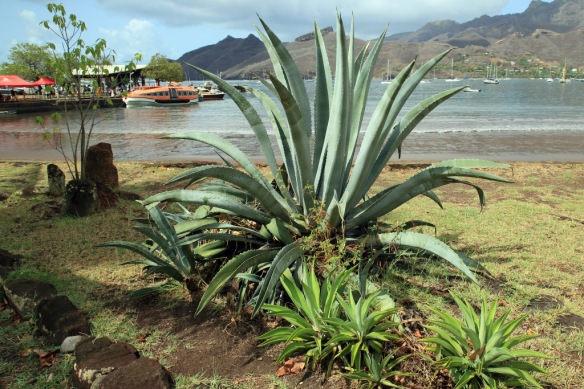 Massive Aloe plant, since we didn’t bring any, would they miss 1 branch?

BTW – no we didn’t test that question.

Judi with Taiohae Bay in background 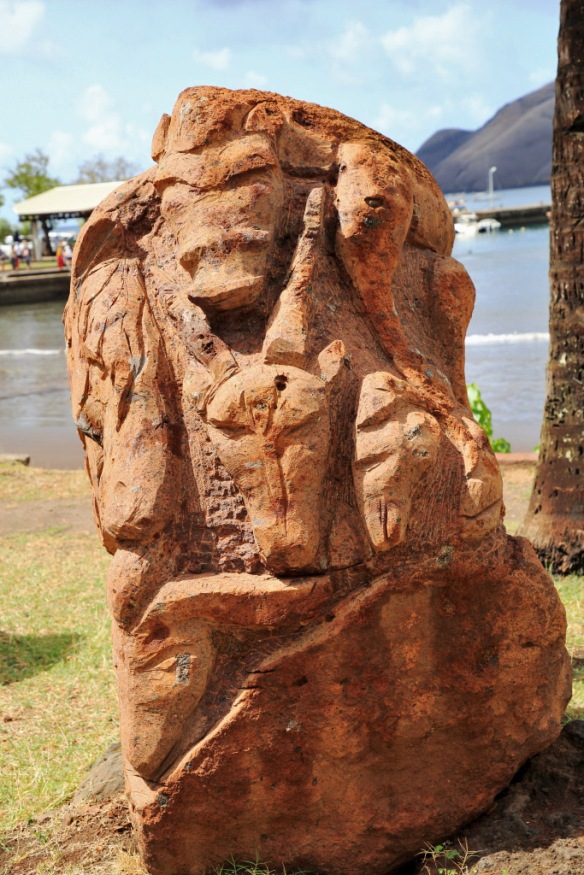 One of a number of carved rocks along the promenade 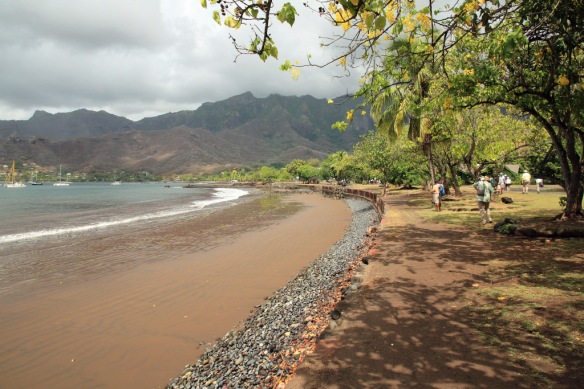 Taiohae Bay Beach from a little past the Info Shack

The beach looked good, but it is a tough access, since it is about a 3 to 4 foot drop down from the promenade walkway around the top. 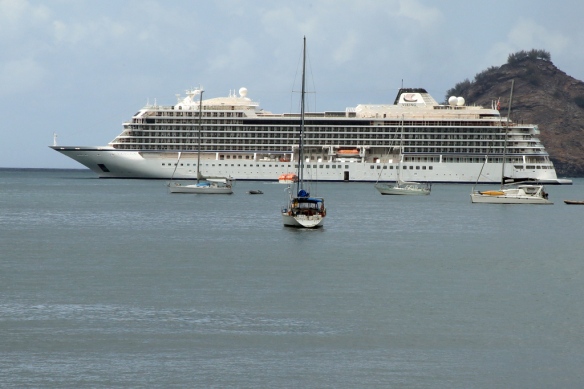 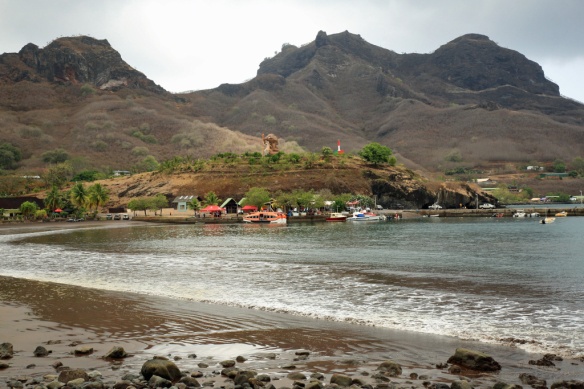 Looking back around the bay at the tender dock

Judi close-up, with blurred back ground

Memorial to French Marines who captured the island

Featuring a semi-circular rock faced wall providing a flat promontory, the memorial remembers the French marines and sailors that captured the island.

In addition to the anchor and flag poles, they also had a couple of cannons pointing out towards the bay.

Taiohae Bay after the memorial promontory

Judi headed back to the ship at this point, so I continued on to the Cathedral and 2nd promontory.

It was Sunday and while the church was open, I didn’t want to go in to photograph the interior, so apologies, no photos from inside.

Carved posts on a building across from the church

Heading back to the bay it was a short walk to the final promontory, which contained a number of carved rocks. 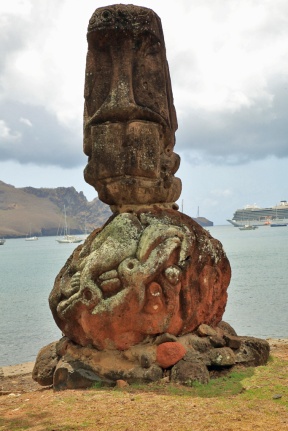 A couple examples of the carved rocks at Temehea Tohua 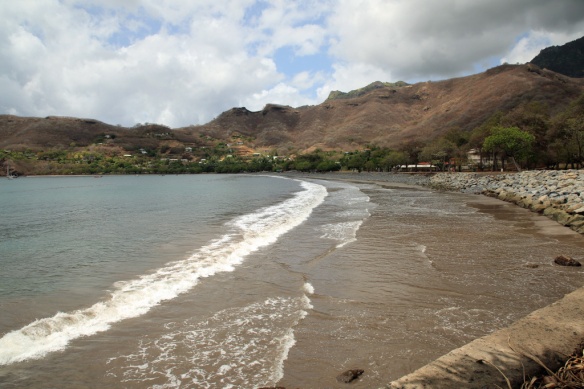 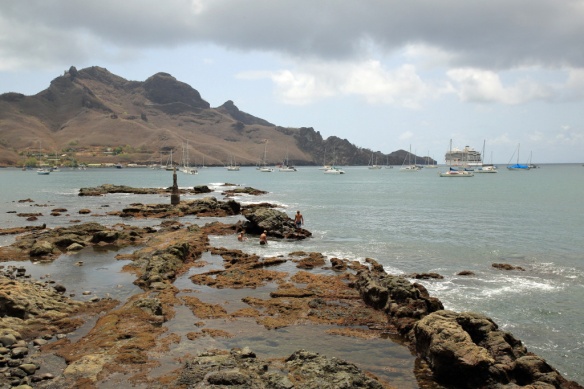 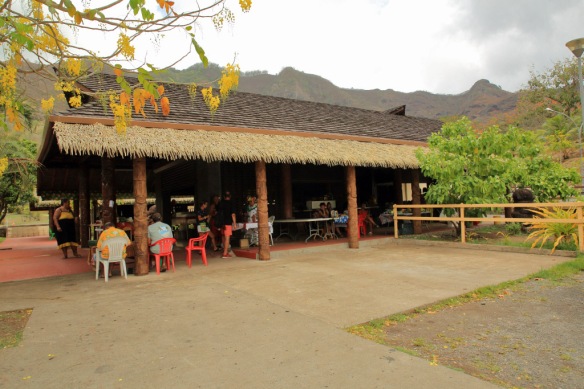 Having covered about 3 miles in the 30C and humidity, it was time to return to the ship for a well earned shower and dry clothes.

Hope you enjoyed the photos of this developing island. While it couldn’t be described as a ship or private tour, it was a most enjoyable stroll around this un-spoilt and undeveloped bay.