After a short 160 mls steaming from Papeete, we were awakened by the tender preparation, one of which is directly below us. With a cabin above the tenders, the neighbours are quiet, but you can experience a little banging before tender ports – minor inconvenience in the overall experience. Today we signed up for the “Included” excursion, thoroughly enjoying a brilliant cruise around Bora Bora.

Temperature: 29C/84F, but actual temps were higher in the afternoon

We steered various courses throughout the night around the various islands between Papeete and Bora Bora, at a speed of about 13 kts.

With a fairly early tour, we headed up to World Cafe for a quick breakfast and had lunch in the Living Room Dk 1 – open faced deli sandwich. Enjoyed dinner in the MDR, sharing again with the couple from Montana, who we ate with last night. Judi enjoyed a tasty and perfectly cooked prime rib, while I had the dover sole, which was amazing. With significant will-power, we declined dessert, but Taytun, one of our regular waiters, appeared with 4 plates of Grand Marnier Souffle. Will power wilted, as we all enjoyed the souffle.

Report time for our tour was 09:15 and within a few minutes our group was called and we were led to the tender embarkation on Deck “A”, where a tender awaited. About 10 mins later we stepped off ashore at Bora Bora. 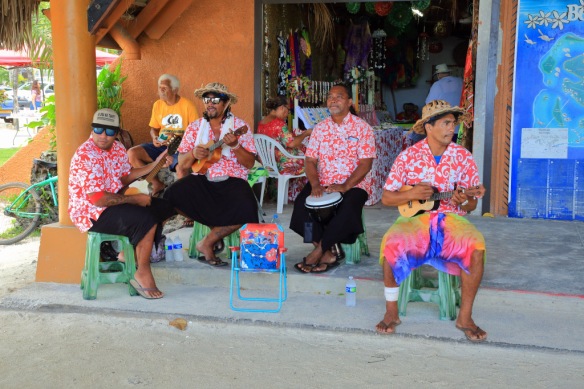 We joined the excursion queue, where we were assigned a group number. Our group of 12 pax was on the 2nd boat and as they were arriving continuously, it was a short wait. Within 20 mins of arriving in the Star Theatre, we were aboard the excursion boat, simply brilliant organisation.

Just outside the harbour, our guide and driver introduced himself. Taho (sp?), who is a local resident, having an extended family of about 500 on the island. His wife is from Papeete. Although we only had 1 hr, he would include as much as possible.

After the introduction, he opened the throttle and the 200HP Merc roared into life and the 30′ fibreglass boat quickly came up on plane, making about 30 kts. This is going to be a fun ride, with liberal amounts of spray on both sides. 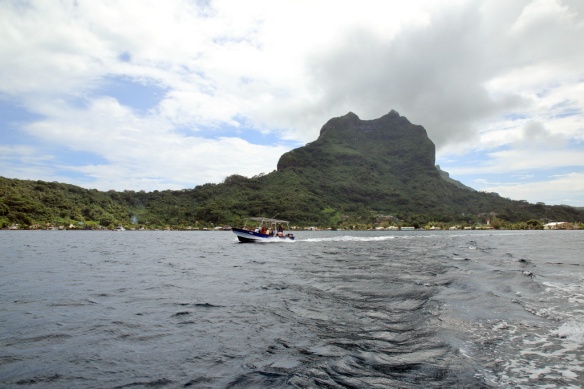 Looking astern towards the harbour

During the introduction, he explained that he would circumnavigate To’opua, stopping to see Stingrays and the public beach. On route to the shallow water Stingray site, we passed Motu Tapu. 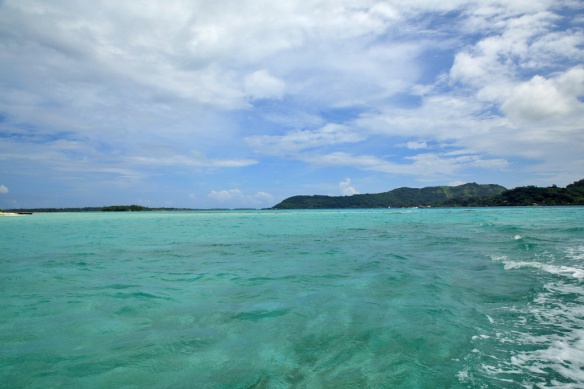 Shortly after reducing speed, we rafted to another boat, which was secured to a float. This was one of his many cousins. Few minutes later a 3rd boat arrived and tied off to us.

Multiple Stingrays swimming around the boats

He discussed the Steve Irwin incident and passed around a Stingray stinger, also showing us how his grandfather taught him how to remove it, if stung. Then the guides jumped in the water.

Other guide interacting with Stingrays 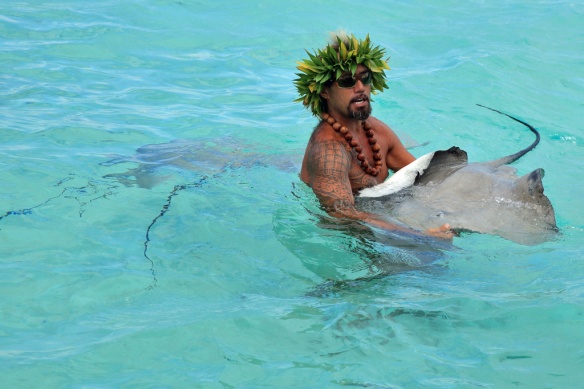 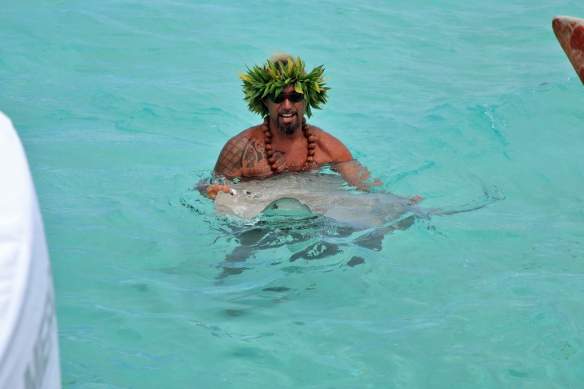 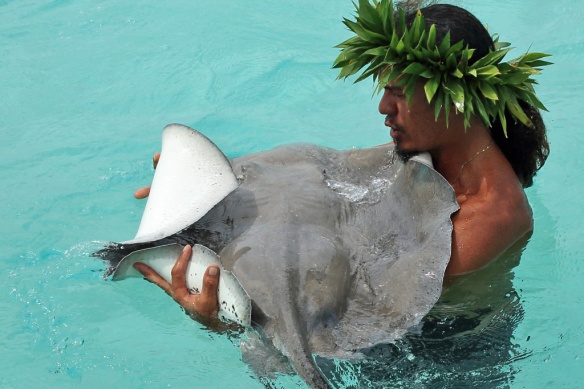 Our guide demonstrating how to carry a Stingray without getting stung

On returning to the boats, they conducted an impromptu performance of Polynesian music, with out guide on the drums and his cousin on Ukelele.

On completion of the performance, we untied and the 200 HP Merc roared into life again as we set off to complete the circumnavigation of To’opua.

Above are the Penthouses at the Conrad Resort, which he mentioned used to be the Hilton. These cost a staggering US$ 8,000 per night.

We continued around the island at high speed, with lots of spray down both sides of the boat. Next stop was just off the public beach. Yes, Bora Bora only has one public beach.

Taho, our guide and driver 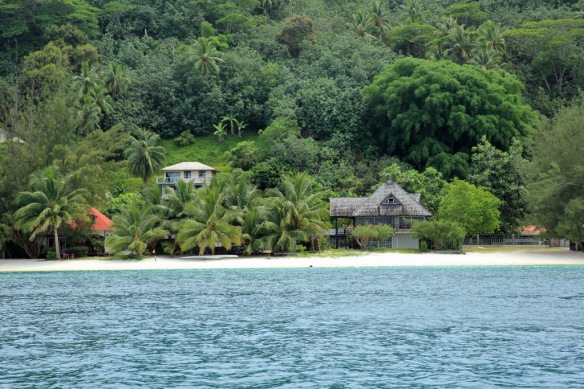 Homes dotted along the water front

Back up to speed and returning to the dock

Taho driving with his feet while serenading us with Polynesian music 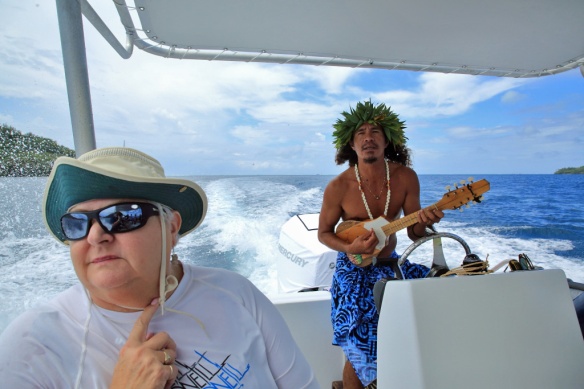 Judi & Taho, check out the spray

Taho was an amazing guide, providing us with lots of information and OMG, he can handle these boats. In fact, every local we observed had first rate boat handling skills. They put some of the tender drivers to shame. We disembarked after almost 1.5 hrs, thoroughly enjoying the tour. We expected a slow cruise and received a high speed, high energy and very informative tour. For an included excursion, this was exceptional.

After disembarking, Judi went searching for pearls, then we wrote postcards and posted them to our grandsons.

Back aboard we chilled in the Living Room, while I got caught up with photos and blog posts. We then headed to the cabin to watch the last few tenders, planning to head up fwd for the departure and sailing into the sunset. As the last tender arrived, we headed up to Explorers’. They started weighing anchor and preparing the tender for stowing when the operation ceased. After a delay of some minutes, the tender headed back ashore. We decided to head to the MDR for dinner.

After dinner we headed to the show with Trivia partners Dennis & Lanie, then a group of us from Pacific NW, headed to Torshavn for a couple of nightcaps, which brought another day aboard the magnificent Viking Sun to a close.