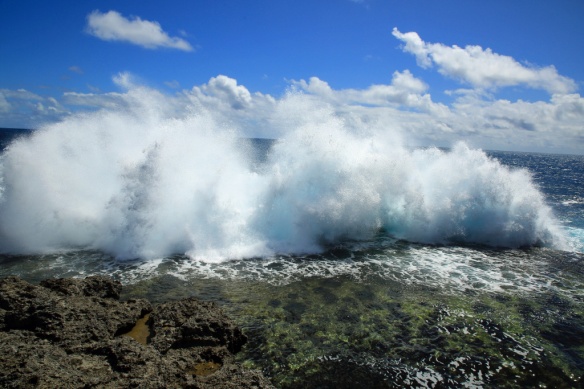 Today is the first of our private tours, which I researched extensively. The ship’s tours were all shorter and focussed on one specific area, but we wanted more of an overall tour around the entire island.

Read on for today’s tour report and photos.

Toni is an ex-pat Brit, from just outside Manchester, who arrive in Tonga about 30 years ago and never left. With wife Leni, they run Guest Houses, the full island tour and a couple of other activities. 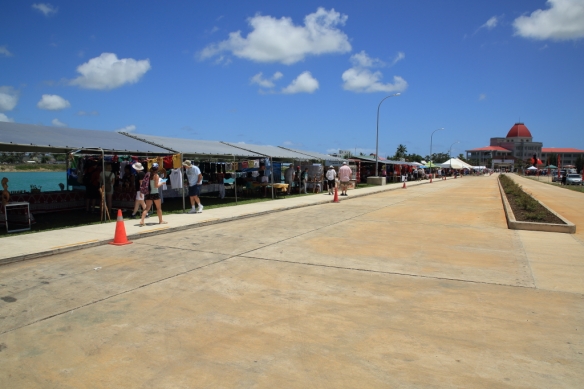 Since we had an early 08:00 start, we ordered breakfast from room service. Wow!, it was amazing, as the cooked breakfast was still hot when it arrived a couple of mins early. The excellent 24/7 service, unlike other cruise lines, is complimentary. Yet another way that Viking excels in customer service, compared to the others.

As we descended the gangway, it was raining, so we congregated in the tent for a few minutes, until the rain abated. Shortly before 08:00 we braved the weather, heading for the gate, where Toni met us with his sign. Unfortunately 4 of our group cancelled at 17:00 last night, so we all fitted in 1 van. However, Tony had already rented 2 vans. 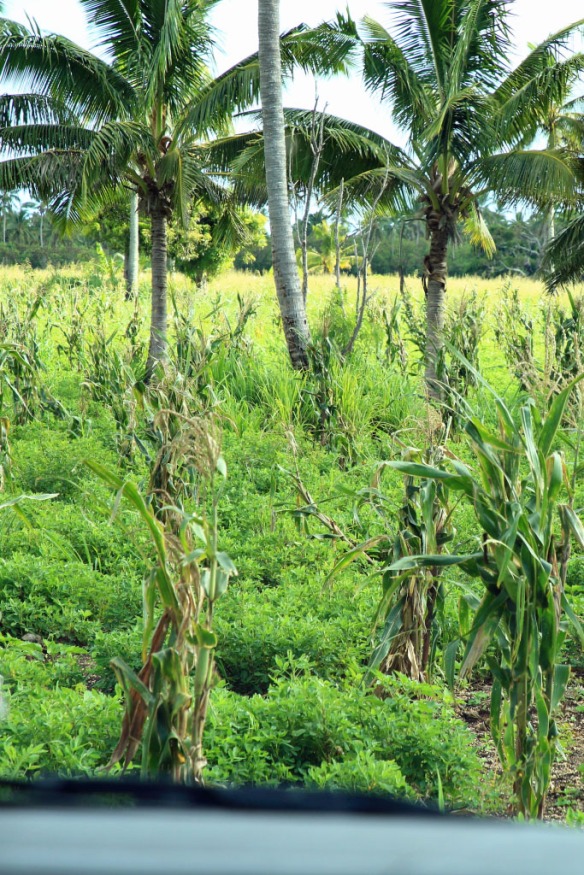 Toni provided an almost continuous commentary, while his wife Leni drove the van. Departing through Nuku’alofa, we headed for the eastern end of the Island. Driving along “China” road, a road through farmland, he explained that land owners must grow crops, or else the Government will take back the land. Therefore both sides of the road had a multitude of crops.

Taro, with both leaves and roots being used

At the end of China Road, we turned right heading through Kolonga and Afa to reach the  Ha’amonga ‘a Maui Trilithon. Having visited both Easter Island and Stonehenge, we are constantly amazed how thousands of years ago and thousands of miles apart, they could arrange these similar structures.

Each of the 2 vertical stones are about 17 feet high and the visible parts weigh about 30-40 tons. The rock was hewn from the local shoreline. It dates from the 13th Century, so is much more recent than the others.

3-paths line up with rising sun at the equinoxs

An upright rock that supposedly has indentations from a head, shoulders and back. Legend has it that the 11th King lay against the rock, causing the indentations.

Since we departed the ship at 08:00 and came straight here, we beat the ship’s tours, so were the only ones at the attraction. Departing Ha’amonga ‘a Maui, we drove along Taufa’ahau Road, or coast road around the East side. This provided great sights of the lagoon and some more fruits.

The breakwater seen above was a project completed by China or Japan and its purpose was for Tsunami protection. I agree with Toni in that all it does is provide boulders for a Tsunami wave to propel inland.

On this stretch we observed a couple of pigs wandering down to the lagoon and foraging in the shallow water. The locals coined the term “Fishing Pigs”, which Toni advised is included in the Lonely Planet series.

We took a side trip along a gravel road to Nukuleka, which was the first landing site of the European settlers. Wasn’t a specific site with information signs, so we didn’t stop for photos. Returning to the Main Road we continued through a series of villages – Hoi to Ha’ateiho. On this section we stopped at the Tiered Tombs, Capt Cook’s landing site and a couple of road side stands to check out the produce.

The graveyards are for the families only, so Toni advised that we can walk along the outside, but in accordance with local customs, we should not enter. 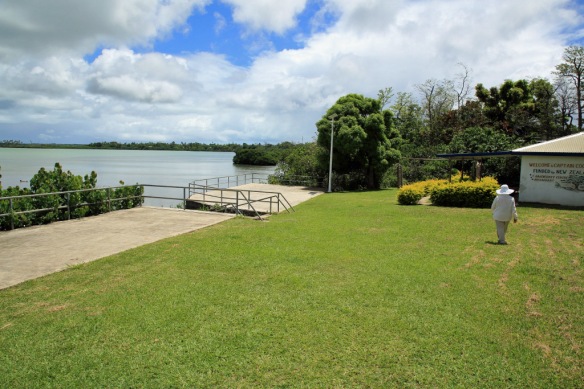 The Lagoon was so shallow that the ships must have anchored a considerable distance off-shore and they came ashore in small boats.

At Ha’ateiho, we turned onto Loto Road, heading for the northern tip of Tonga. This was a series of villages with many churches, religious schools and agriculture. Toni mentioned the Island had about 600 churches, with Mormons making huge inroads, especially with their schools. The Government schools only cover primary grades. Just passed a huge Mormon school we reached the famous 3-headed palm tree.

Although it looks like only 2 heads, the one on the right also splits into 2 separate heads.

At Matahau, Toni advised that the road ahead was rough, so we detoured over to Hihifo Road, to continue our journey to the North. After passing the joining of the 3 main roads we stopped at the Flying Foxes, which really are only bats. 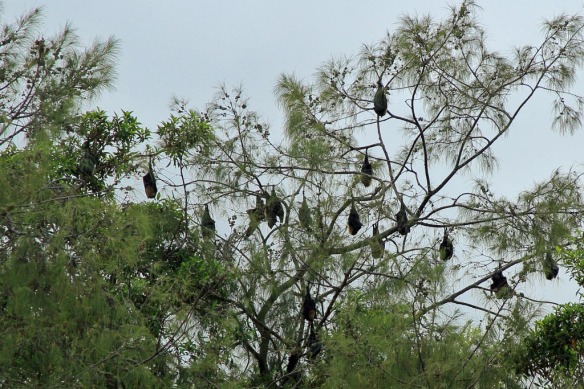 We continued through a series of villages, where they have a program of cleaning up the villages, with clean streets and grass verges along both sides of the road.

Just before the north tip we turned left onto Palm Avenue, towards Ha’atafu Beach. In addition to a beach stop, this was also lunch stop. Owned by an Australian lady, it was a great place for lunch and refreshments. Managed to try a Pale Ale from the local Tonga Brewery. After lunch we walked the 100 yds down to the beach. 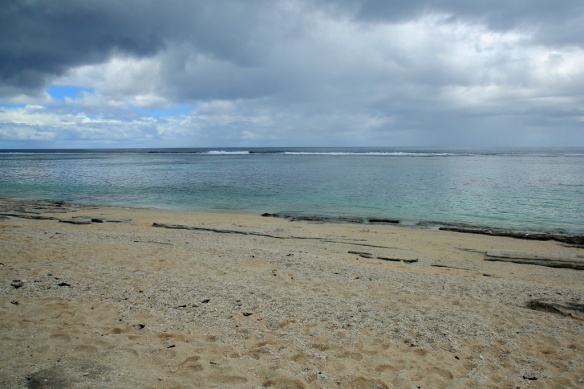 Very course sand and rather steep. Even with fresh winds, the offshore reef provided a very calm and easy entry into the water.

Tropical Gardens above the beach

Once we were back aboard, we continued to the Northern tip of the island, with 1 quick stop to view the grass type plant used for making flax. Toni demonstrated how they slice the leaves length wise and remove the barbs from the edges. 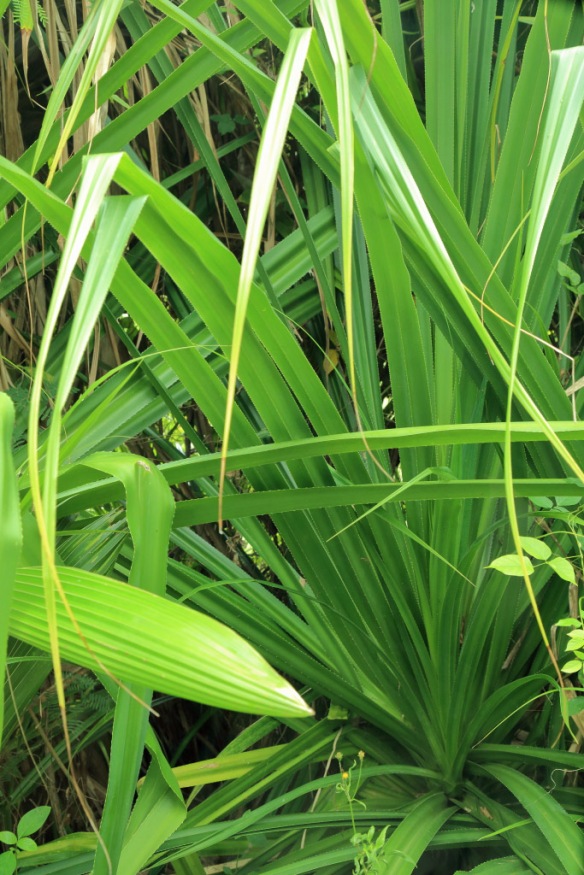 Literally, the end of the road

Having reached the end of the road at the Northern tip of the island, we retraced our route down to the joining of the 3 main roads. We took Liku Road, which was to the right and follows the coast.

One of a series of large rocks, this one is about 1/4 mile inland from the coast. At about 30 feet high, this boulder weighs about 1.5 million tons. It is believe to have been propelled inland during a volcanic triggered Tsunami. However, local legend states that demigod Maui was awakened by a crowing rooster. He threw increasing large rocks to silence the rooster, with this one providing the killing blow.

Enroute to our next stop, we spotted a giant Tongan Spider.

The next stop was the amazing blowholes, where the reef is actually at the coastline. 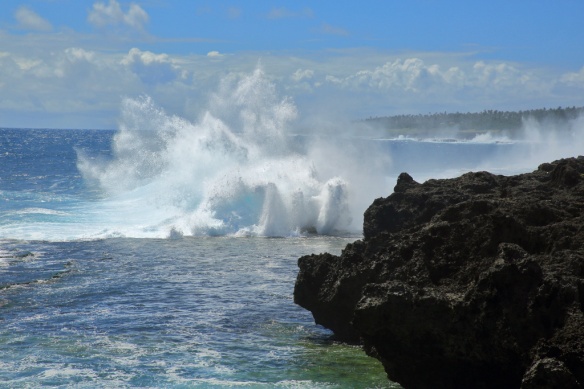 Departing the blowholes, we started heading back to Nuku’alofa,

Thin trees, where the bark is used for making mats

In Nuku’alofa, we stopped at the Royal Tombs, Tonga Free Church and the Royal Palace 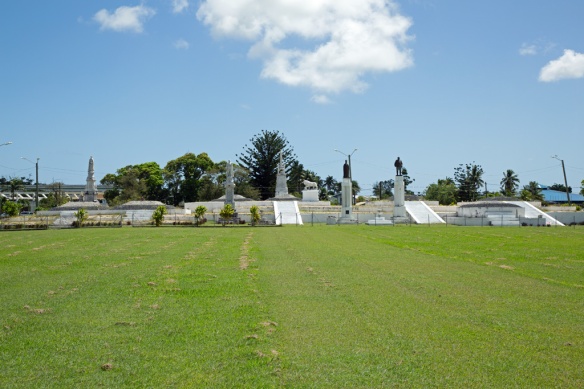 For additional photos of Nuku’alofa, please check the previous post of my walking tour yesterday.

As we stopped at the main gate of the Royal Palace, we noted the gate was open and a couple of Police motorbikes. A staff member was also standing by the flagpole, so we determined the King was about to depart. Sure enough, a limo was stationed at the door and we spotted the King & Queen heading for the limo.

Toni dropped us back at the ship about 16:30, after 8.5 hours of touring the island. This was a brilliant tour, we definitely received great value for Tongan $100, which is about US $44 and CAN $55.

If you are visiting Tonga and want to see the entire island, we definitely recommend getting in touch with Toni and booking a tour with him. You will find a plethora of taxi driver and tour hawkers on the pier, providing cheaper tours, but not as comprehensive and detailed.