Our final sea day, before we arrive in the magnificent Bay of Islands, New Zealand tomorrow morning. It has certainly been heavily biased towards sea days, with about 18 of the first 22 days being at sea. Only goes to prove, the Pacific is a huge ocean.

The ship maintained SxW’ly courses towards the Bay of Islands. Since departure Suva, we have steamed 757 miles at an average speed of 16.8 kts. With 299 miles to go, we only require a speed of 16.1 kts, so will shortly drop a DG to save fuel. 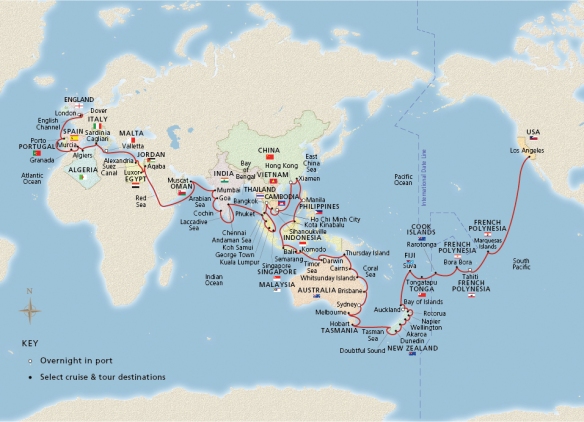 The winds have remained consistently on the Port beam – SE’ly about 20 kts.

We enjoyed lunch in the MDR, sitting at a table for 2, but chatting with the couples on each side.

After breakfast, we headed down to the Living Room on Dk 1, where we enjoyed a couple pots of tea and I worked on a few photos. Being our final sea day before a crew change in Auckland, it was the final Passengers v’s Officers bean bag toss. It was also the Hotel GM’s birthday, so a cake was provided. The bean bag was hotly contested, with Passengers winning bragging rights. Rumours are rife that some of the Officers may have been bribed, as some of their throws scored points for the passengers. A few passengers also returned to cabins to find bed frames had mysteriously disappeared. A tough one for security to resolve. All in good fun and is testament to the incredible atmosphere aboard this great ship.

At 11:00, I headed to the Theatre for the resident historian’s lecture on Kiwi influence on the Battle of Britain. Another excellent lecture, where I learned the Commanding Officer of 11 Group, which included London and the South Coast was a New Zealander. 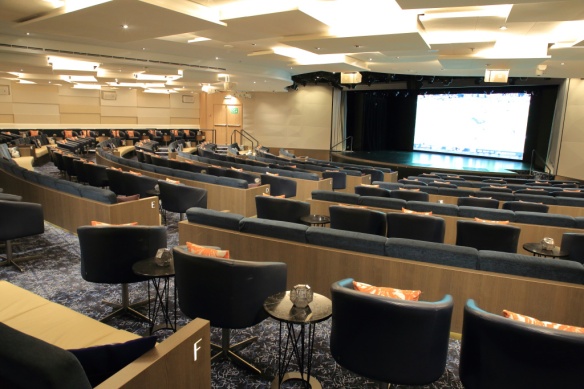 On completion of the Captain’s Noon announcement, the daily Trivia battle commenced, which will be our last until we depart New Zealand. Today started badly, with us getting the first question wrong, but then improved dramatically, scoring an impressive 14/15. Another team also scored 14. so we were in the dreaded tie-breaker.

Tie-breaker question – “What is the population of New Zealand?”

From yesterday’s lecture, I recalled it being stated as 4.7 million, so suggested 4.65 million, so as not to go over. The team thought that was too high, so we submitted 4.599 million, which was a winning answer. Way to go team – our 4th win.

In the afternoon, we attended the Bay of Islands port talk and after dinner the evening show with fiddler Juliette Primrose.