After a slow steam down the coast from departure Akaroa yesterday, we were docked in Port Chalmers, the port for Dunedin, about 07:00. This is a scenic arrival, as the ship navigates the buoyed channel through the inlet, but on checking outside, I noted it was totally overcast, with very low clouds obscuring the shore. Therefore, no point heading out to watch the arrival.

Today we have a private tour, which starts with a drive through Dunedin, with multiple stops, followed by a drive around the Otago Peninsula viewing various birds, sea lions, penguins and albatross.

The camera shutter got a serious workout today, so my dilemma is how to pick only 30 or 40 photos for the blog out of almost 250. Well, I culled photos down to 66, so enjoy.

We departed the ship, walking around the docks to the passenger terminal, which is located between the 2 berths used for cruise ships. We met our guide (Ben) inside and once we had the 4 pax from our ship and 6 from the Golden Princess, we set off. 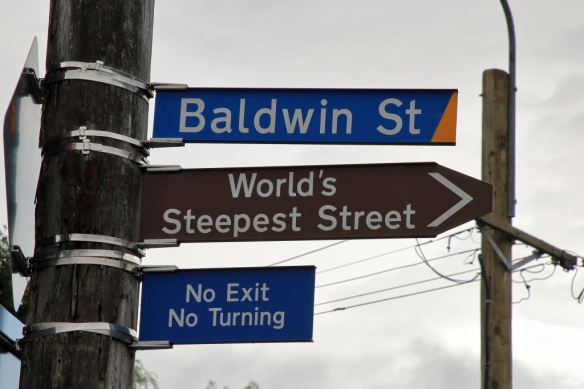 After a short drive from Port Chalmers, we entered Dunedin at the new multi-use stadium, then headed up Lovelock Ave to drive around the Botanical Gardens. Returning to the city down Cumberland St, we thought it was steep, but that wasn’t the steepest street.

The Dunedin founding fathers established a rigid layout of streets in a block pattern, which caused an issue with this street – either change the street direction, or go straight up the steep hill. They elected the latter, so Baldwin St is 19%, with one section reaching 23% elevation. A town in Wales has pestered Guinness Book of World Records (GBWR) saying their street is steeper, but they measure it differently. Within a week of Wales receiving the GBWR designation, Dunedin received a letter from Wales, requesting their signs be removed. Being of rather stubborn Scottish heritage, Dunedin gave the letter careful consideration, but as seen above, the signs remain.

Next stop on our Dunedin tour was the Otago University, where we parked and Ben walked us a short distance through the grounds. 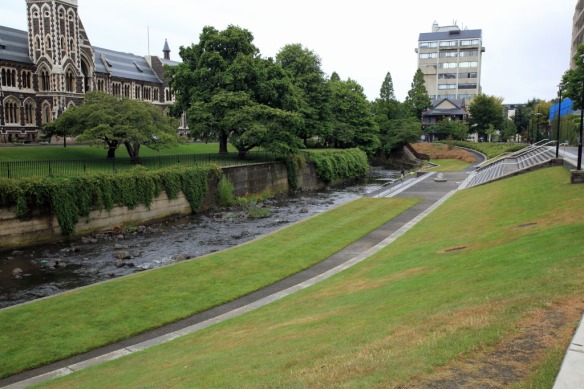 Leith River running through the grounds 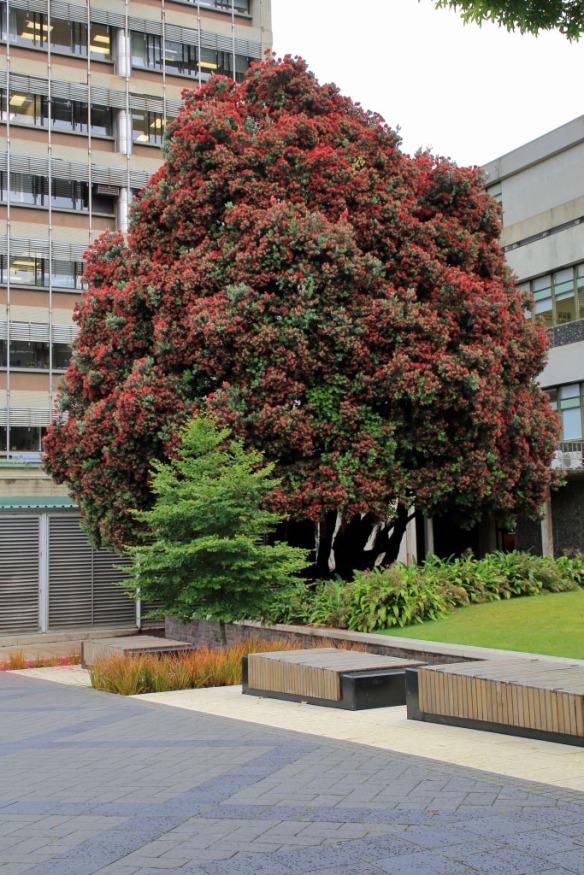 This tree is known as the New Zealand Christmas Tree, as it gets red flowers in December

Departing the university, it was a short drive to the Dunedin Railway Station, passing the old Cadbury factory enroute.

Cadbury, with factory to the right

The locals tried to purchase the factory and had sufficient funds, but the company backed out of the deal. The grounds have now been purchased, with the factory being demolished for a new hospital.

Completed in 1906, it was built from both light and dark stone, which gives the distinct look, common with other grand local buildings.

Mosaic floor inside the main entrance

Judi sitting on a bench in the main foyer

Departing the station, we headed down Wharf St, passing a couple of older buildings. 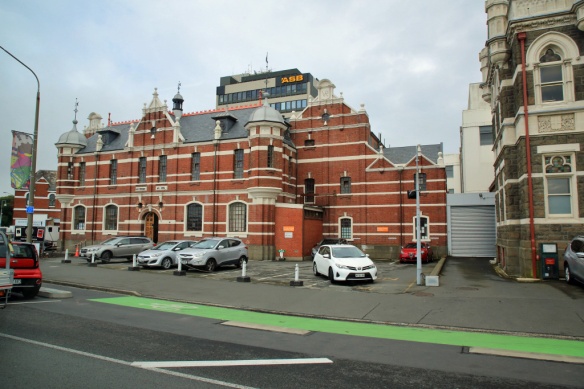 HM Prison, where scoundrels used to reside at the pleasure of Her Majesty

Wharf Street became Portsmouth Dr as it rounded the end of the inlet, then climbed through housing sub-divisions on the Peninsula. The city council are very protective of urban sprawl consuming farming land, so have clear demarcation of city limits. It was very pronounced, as we drove through dense suburbs, then transitioned directly to farmland.

On the peninsula, our first stop was Larnach Castle, which unfortunately due to the weather was mostly shrouded in low lying clouds. 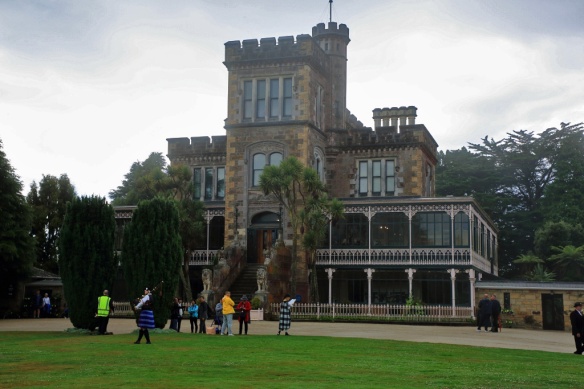 Built in the 1870’s by William Larnach, a well known businessman and politician, who was actually a corrupt scoundrel. He took his own life, with the castle being sold shortly thereafter. It fell into disrepair, until purchased by the Barker family in 1967, renovating the castle extensively. As one of New Zealand’s few castles, it is now open daily as a tourist attraction.

Piper welcomes passengers off each bus

Cafe where we stopped for tea and scones 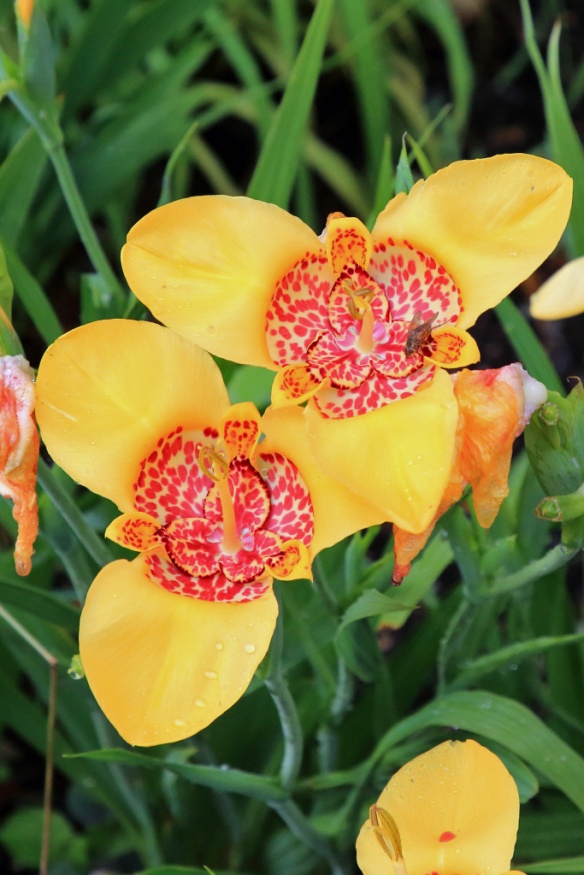 Flowers in the garden

Departing the castle we spotted a quick clearing in the clouds

The remainder of the tour would now focus on wildlife and I believe you will agree it most definitely didn’t disappoint. Our first viewing was of various birds, as we drove around Hooper’s Inlet.

Descending from the ridge to Hooper’s Inlet

The little white specks, seen above, are in fact sheep, lots of them. On my first trip to New Zealand in 1975, they had about 90 million sheep. We took 500,000 back to UK. However, today they only have about 30 million sheep, but produce more meat from less sheep, as the wool trade has contracted significantly. 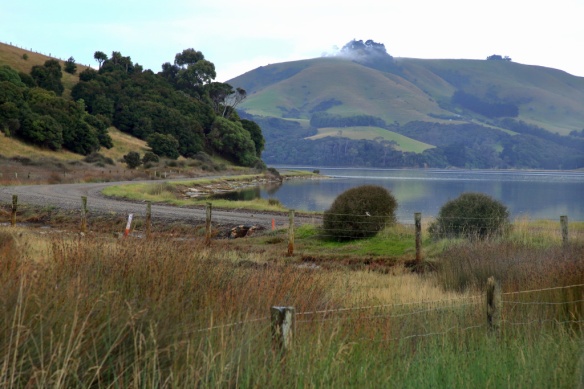 Hooper’s Inlet from the inshore wetlands looking towards the entrance

Now for the stars of the show – the various birds we spotted.

Pied Stilt strutting through the water 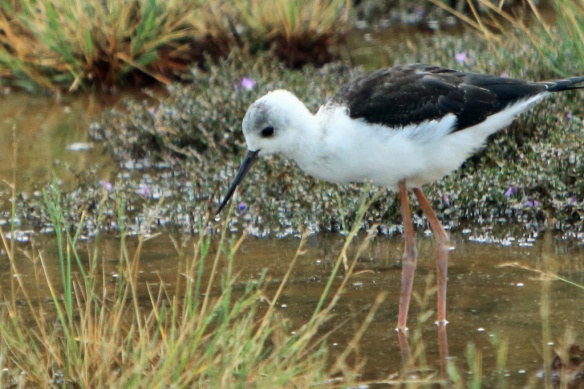 As an additional bonus, Ben continued right to the end of the inlet adjacent to the shoreline. We hopped over a stile, then walked about 400 yds to the beach. Approaching the beach, Ben put his arm out, shepherding us off to the side of the track, as a full grown sea lion was resting at the exit onto the beach.

Adult Sea Lion sleeping, but blocking path to the beach

The 3 juveniles were rough-housing

Back in the mini bus, we retraced our route about 1/2 way round the inlet before climbing back up to the ridge, then heading down to the other side. Next stop was Penguin Place, which is a privately operated sanctuary. The yellow eyed penguins live on the sanctuary, but they still go out to sea in search of food. 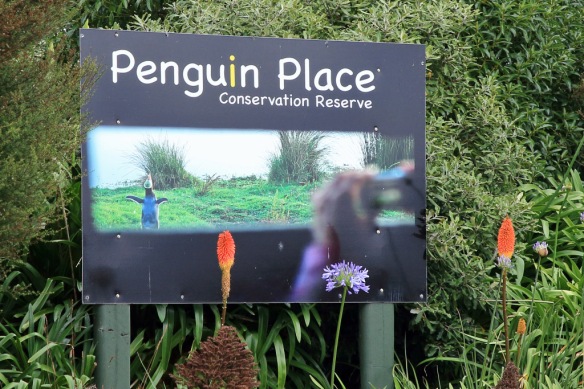 We drove into the reserve almost to the opposite side of the peninsula. Once parked we hiked down a couple sets of stairs. 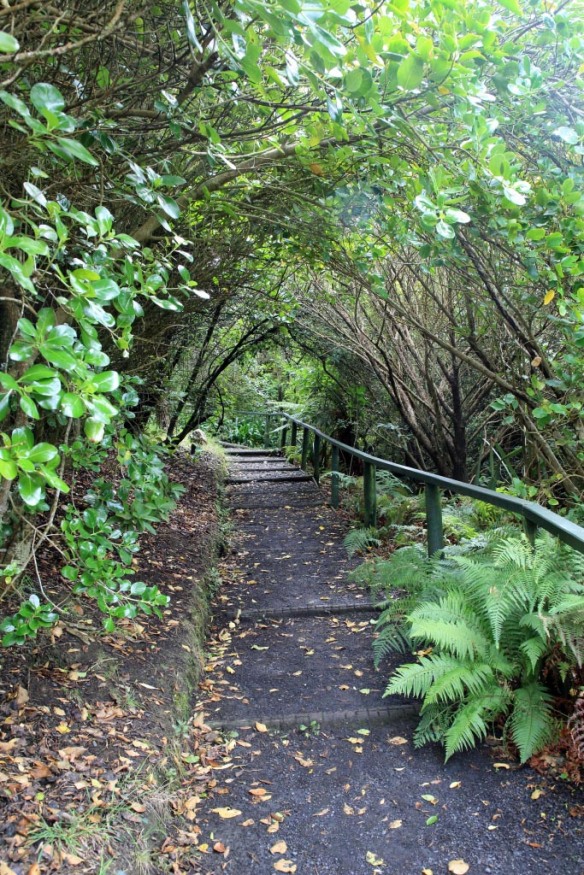 Looking back up one of the sets of stairs we descended

On entering the trench system, they request everyone stays together and remains quiet, especially when viewing penguins from the “Hides”

Heading through the trench 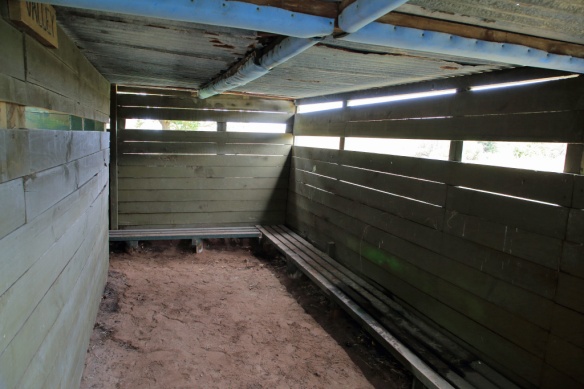 We could view the penguin and take photos through the missing board, but were requested not to put hands, lenses, etc through the viewing gap. 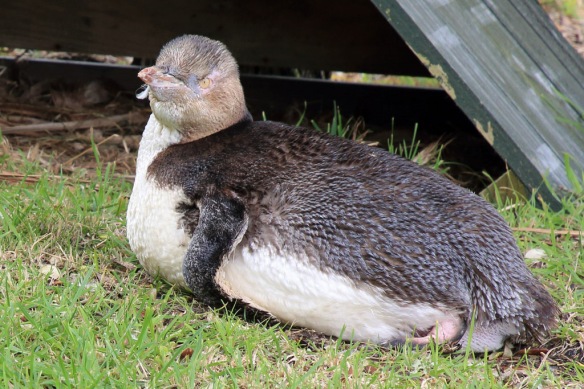 Only 1 penguin was in view, so we retraced our steps out of the trench and hiked up to a lookout, passing a baby hiding under a tree. The adults were out at sea looking for food. 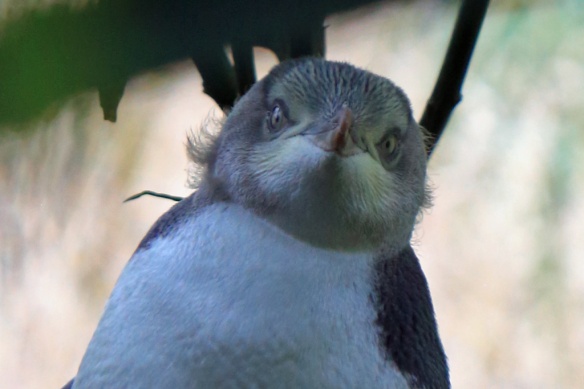 Baby penguin hiding under a tree

Due to the distance and leaves, it was a challenge capturing the entire penguin, so these ones were the best shots. His face frequently was hidden by the leaf above, so timing on the shutter button was critical. 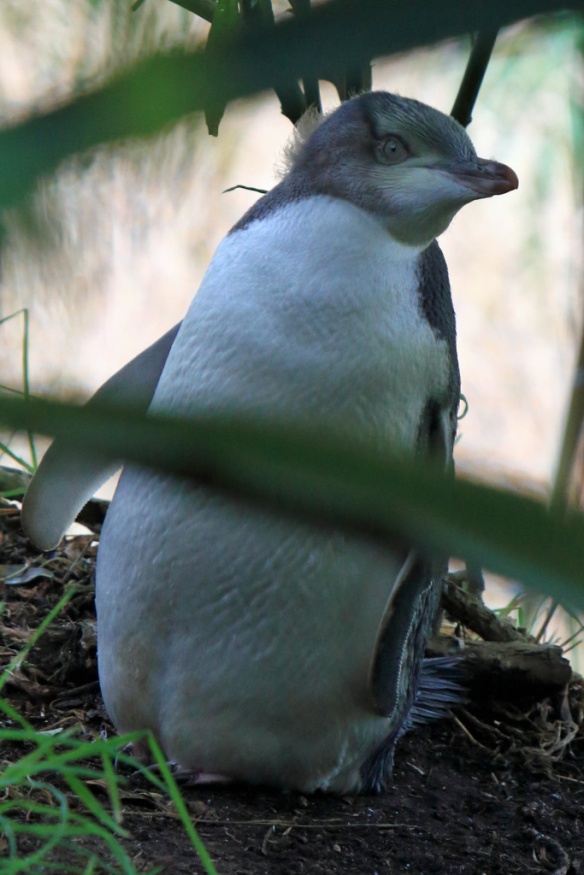 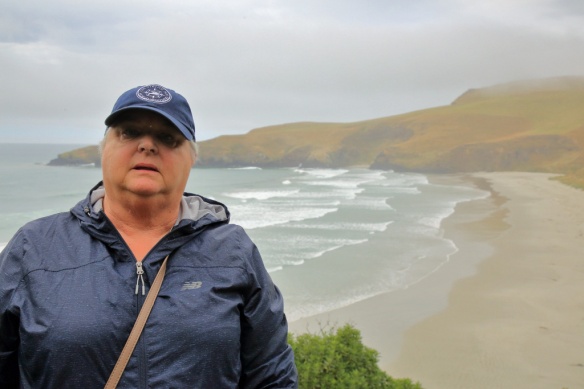 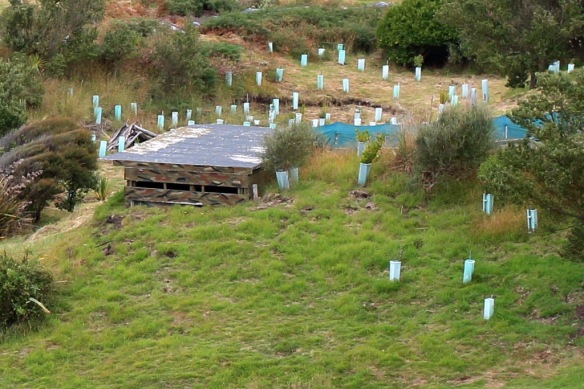 On return to the mini-van, we returned to the entrance, where we visited the rehabilitation area, where they have multiple pens for young or invalid penguins. Enjoy photos of the baby penguins. 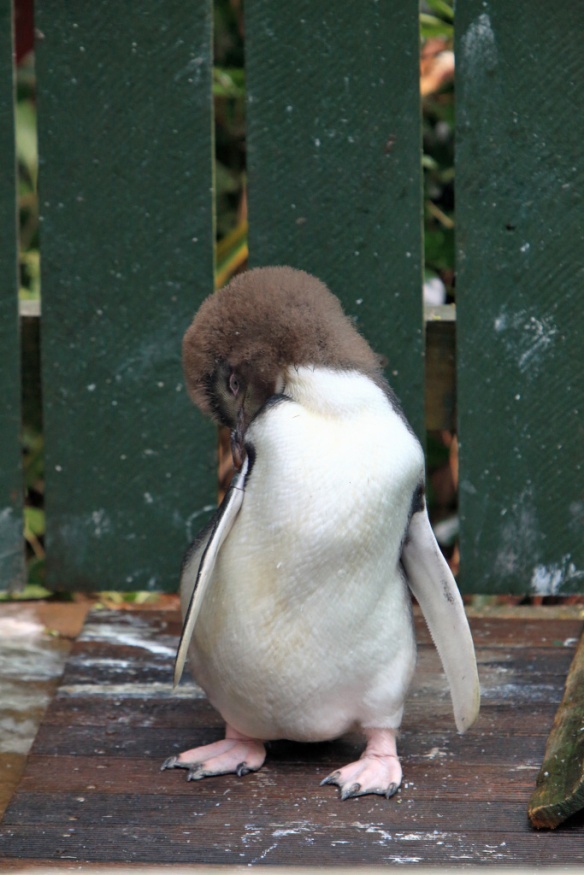 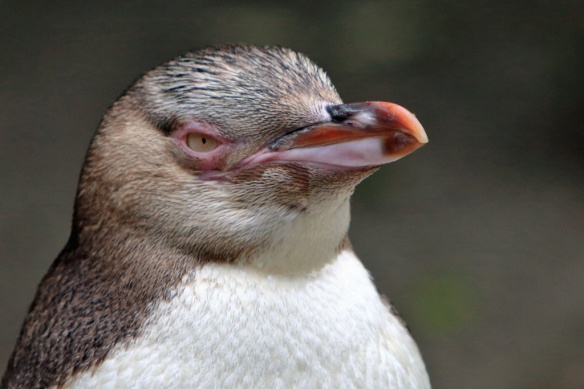 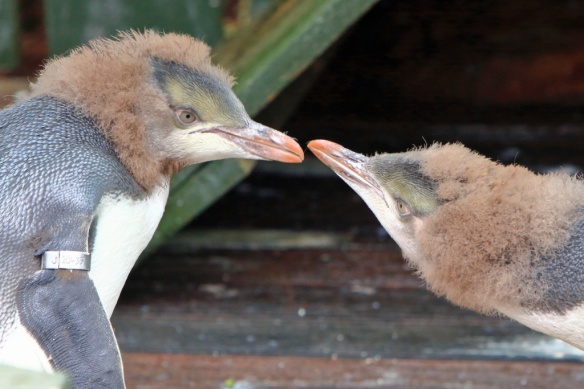 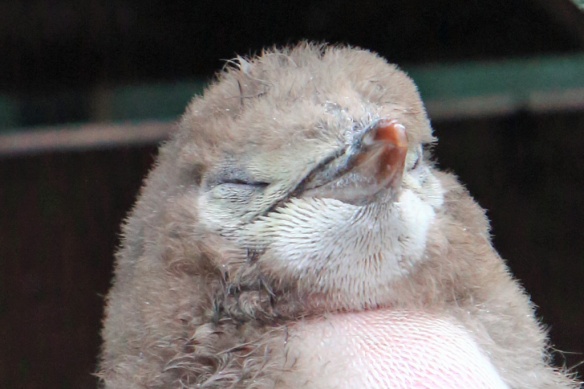 Even when bottle fed, once released they have same survival rate as those raised by parents

Departing the Penguin Reserve, we headed to our final stop, the Royal Albatross Centre. 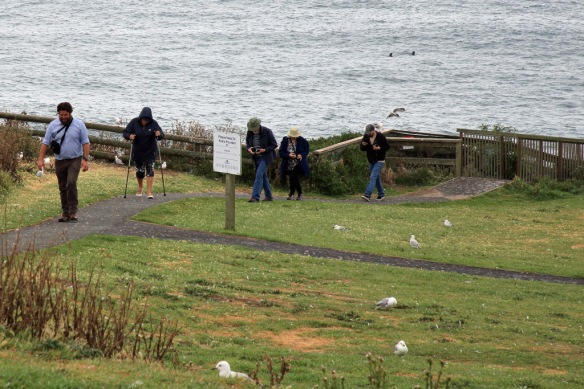 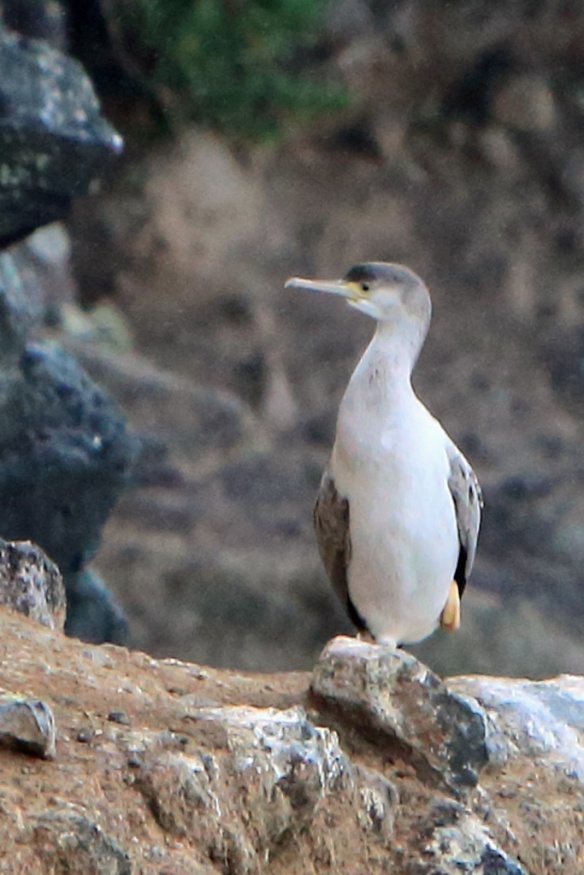 Royal Albatross sitting on the cliff

We enjoyed 15 minutes at the Royal Albatross Centre, as we had to depart for the return to the ship. Extensive road works are taking place, delaying us for about 10 minutes, but once through the road works,  Ben made good time, getting us to the terminal about 15 mins before all aboard.

This was an exceptional tour and if you are in Dunedin, I highly recommend trying Back to Nature Tours.

Viking provided a complimentary shuttle service to Dunedin from Port Chalmers. The shuttle bus departed from the bottom of the gangway.  Not sure of the frequency or where it took you in Dunedin.