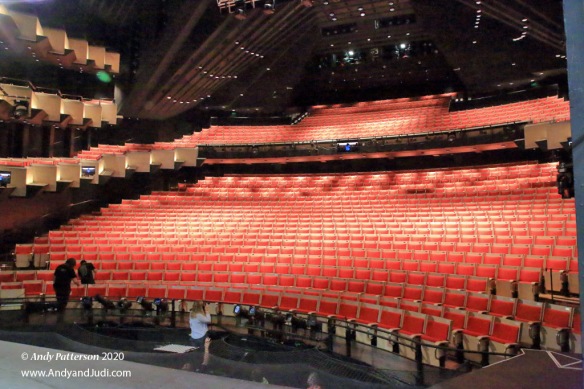 Normally when in port overnight we organise private excursions on the first day and then ship’s tours on departure day. However, to complete the Opera House backstage tour, with the ship, would have cost almost double. It starts at 06:45, well before our scheduled arrival on the first day, so we booked it on the last day in Sydney.

Since we booked the tour directly with the Opera House, we were responsible for our own transportation. Since the water shuttle service started at 08:00 and we had to be there by 06:45, I booked a limo from Omni Limo, a company we have used on previous visits. A couple of ladies from the ship booked an Uber, but not having Uber in Vancouver, we never think about them as an option. 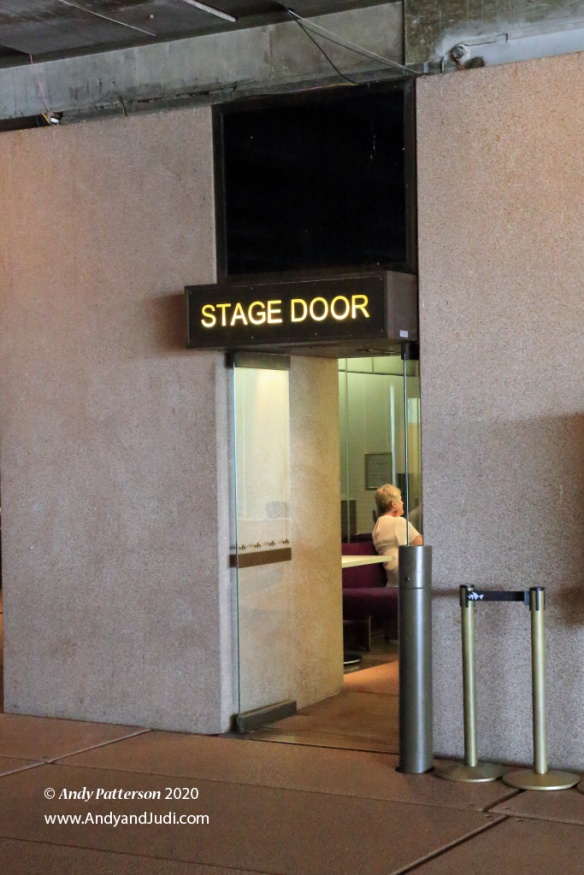 With an early start to the morning, we were at dockside at 05:30 and were picked up at 05:45, getting to the Opera House shortly after 06:00. Vehicles drop off at the roundabout, so it required a short walk to the Stage Door, which is located below the main staircase.

Shortly before 07:00, our group of 9 met Bella, our tour guide. We were provided access cards before entering into the back stage area. Reminded me of mega ships, as the first person we met was the photographer. Once the obligatory photo was taken and we were kitted out with a Hi-vis vest, Bella started the tour.

We started in the main thoroughfare, which runs the entire length of the Opera House, between the two sets of sails. As this was a staging area with many employees, no photos were permitted. This area was initially the drop point for all supplies, so had a continuous stream of lorries, delivering a variety of goods. It was a dangerous place and had extensive diesel exhaust fumes. Bella took us to a huge lift where we descended 3 levels to the new receiving dock, which is 30 feet below the water. All trucks must now descend a series of ramps to the loading docks, where everything is unloaded and distributed to where required. This new loading dock project cost over AUS $100 million.

Departing the loading dock, we stopped at the Grand Piano storage locker, which was directly outside the main lifts, 1 deck above the loading bays.

Bella discussed the tuning of pianos, which is all completed by a single person, who has been with the Opera House for 35 years. He took over from his father who did the first 10 years. He tunes every piano every day.

We returned to the Main Deck, central alleyway, where Bella explained that the employees have access to all 7 performance venues. Numerous props and stage effects are stored in this area. Bella then explained how they service the stage in the Joan Sutherland Theatre, which has no wing spaces and no additional space at the rear. Therefore, they have a massive lift at the rear of the stage, which goes to/from the main deck. She advised the stage hands can disassemble a stage, move it the lift and down, then bring up a new stage and assemble in about 4.5 minutes.

From the main deck, we climbed up stairs to the “Green Room”, which is 1 deck above the main thoroughfare, running straight down the middle of the Opera House. This is the employee’s cafeteria and recreation centre. It has ready access to all performing venues. No photography was permitted.

Next on the agenda was the Joan Sutherland Theatre, which is on the right side of the Opera House, looking from the outside stairs. It is the 2nd biggest venue and is on the same side as the Concert Hall, which is the largest venue. The Concert Hall is currently closed for 2 years, while they conduct an extensive upgrade to the acoustics.

The Joan Sutherland Theatre has an exit to below the stage, which comes out in the back stage area. The stairs above lead down from the stage. Apparently it is very rarely used during performances.

Our next stop was the adjacent orchestra pit. 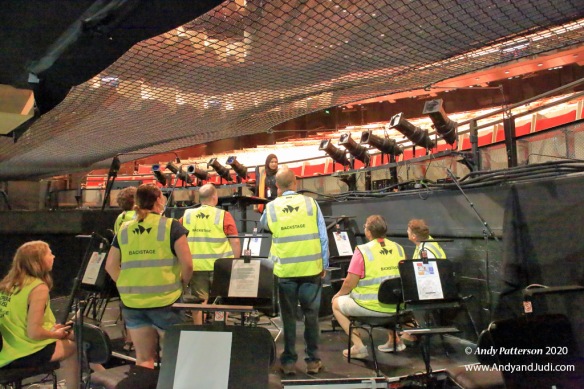 Above is our group standing at the front of the Orchestra Pit, with guide Bella up on the Conductor’s Stand. The Conductor’s Stand is actually a wooden box, which they can move up/down to ensure they can see the stage. It has a red and green button on the floor, to move up or down. 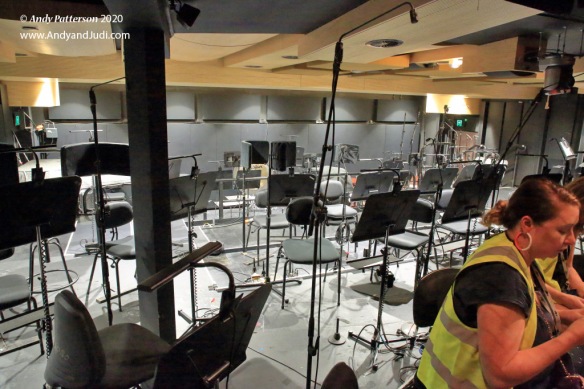 Looking back into the Orchestra Pit from the front

Orchestra Pit from the side 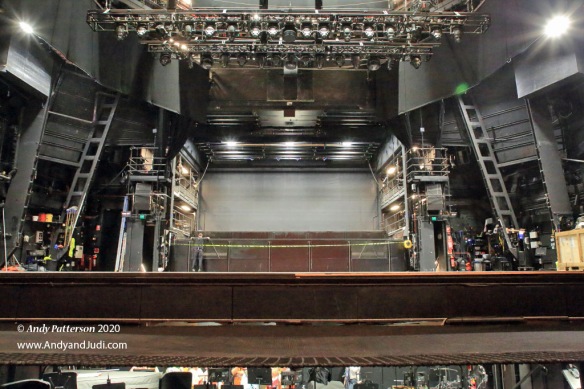 Conductor’s view of the stage

Departing the Orchestra Pit, we walked along the dressing room alley, which leads off from the “Green Room”.

Dressing Room for one of the stars

One of many racks of clothing

The Stage Access led to a couple of flights of stairs, as the Stage is 1 deck above the dressing rooms. Since many of the elegant costumes do not fit through the stage access door, at times, the performers enter the stage access in under garments, donning the final costume at stage rear.

With a hard plywood floor, the stage is not currently set up for ballet. During Ballet season they install a cushioned floor, which is washed daily with water and “Coke-a-Cola”. This provides the sticky surface required by the dancers.

View of the seats from the stage

Looking at the stage from the audience, the Stage Manager’s control panel is at the front of the stage on the right side. These control panels were recently renewed at a cost of AUS $ 1.5 million each. 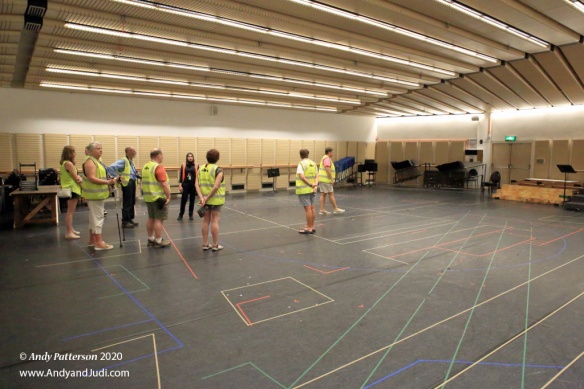 The lines on the floor relate to individual performances, laying out the general routes followed by the dancers on stage. The floor was definitely soft and cushioned.

As the Concert Hall was closed, this concluded our backstage tour of this side of the Opera House, so we headed down to the ground floor, then to the other side, to view the smaller venues. 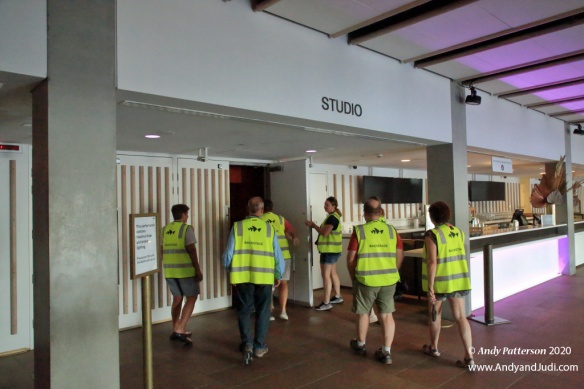 Our group entering The Studio

Seating 300, this is one of the smaller venues and is the most flexible, catering to a wide variety of performances. It also has a bar within the venue.

From the Studio we exited back into the main thoroughfare, before entering the Playhouse, another of the smaller venues, which seats 398. It is often used for shorter performance aimed at children.

Departing the Playhouse we returned to the main thoroughfare, before climbing the stairs back up to the Green Room, for breakfast. Breakfast consisted of 3 choices – Bacon & eggs, continental or fruit. We made our selection at the start of the tour. It was served with tea/coffee and orange juice.

This concluded the tour, so Bella escorted us back outside the Stage Door. Definitely great value, as this was an excellent tour, with a very knowledgeable guide. If on a cruise ship overnight, I recommend booking it direct, rather than through the cruise line.

Throughout our 3 days in Sydney, Viking provided the following complimentary shuttles to the CBD: