This is another of the new ports added since we boarded the magnificent Viking Sun. Noumea in New Caledonia was the first new port and we had a great overnight stay. Well, Townsville was equally impressive, even if the weather wasn’t overly co-operative.

Read on for lots of photos, including Judi holding a Koala.

Our tour this morning started at crack of dawn, so I skipped my walk, especially as I anticipated walking a few miles on the tour. We headed up to the World Cafe for a quick breakfast before reporting to the Theatre. Within minutes, we were enroute to the gangway, but passing the lifts, we saw that outside it was torrential rain. Since it was a 400 yds walk to the terminal, they halted disembarkation until it had eased from torrential to only heavy rain. Fortunately we had the Viking brolly with us. 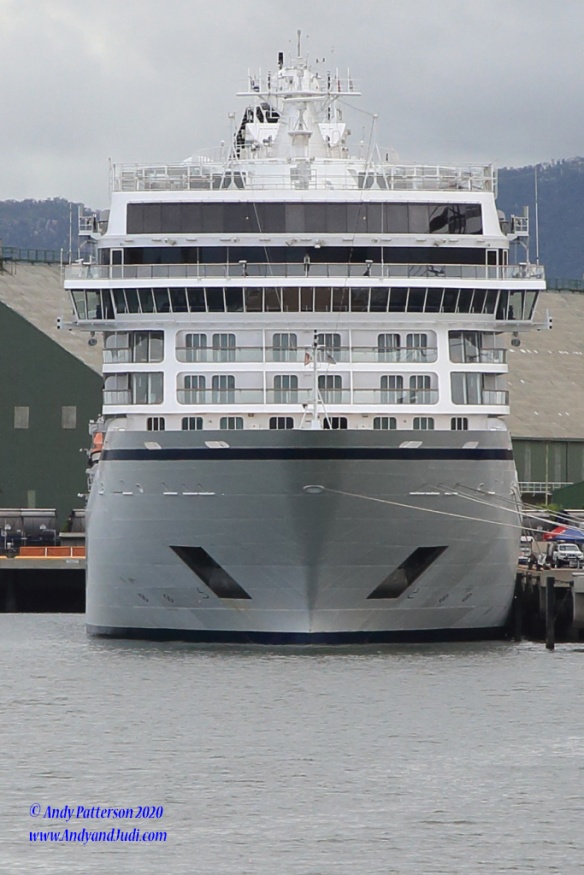 Since it was a 300 to 400 yds walk from the gangway to the terminal, Viking arranged for a complimentary van for those passengers unable to walk. It picked up at the gangway and dropped off at the terminal.

Although the ferry terminal is only a 1/4 mile from the cruise terminal, they arranged for buses to pick us up and drive us to the ferry. Our tour had less than would fit in a single bus, but they split us into 2 separate groups. We had about 24 in our group.

Aboard ferry with visibility reduced due to heavy rain

Once at the ferry terminal, we walked straight aboard, climbing the stairs up to the passenger decks. No lifts on these boats. The trip across to the island was a little choppy, taking about 40 mins.

Disembarking the ferry we were directed to our 2 buses, with our group heading straight to the Koala Village, while the other bus started with the scenic island tour. 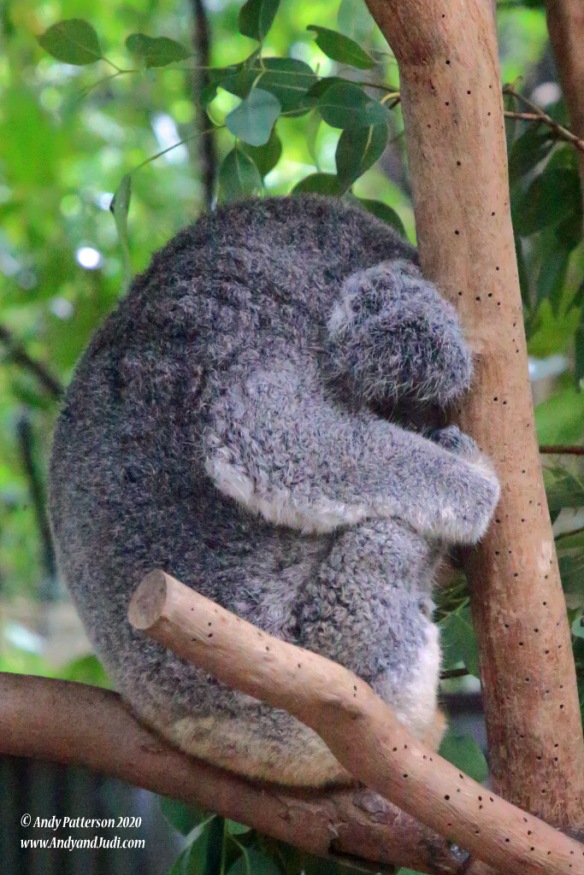 Entering the village, we met our excellent guide “Cassie”, who stayed with us during the entire 90 mins. She took us directly to a Koala pen, where the plan was for each of us to enter individually, having an opportunity to pet the Koala. However, whether due to the weather, or other reasons, the little chap wasn’t interested in receiving visitors this morning.

We checked out a couple of other Koalas, so enjoy the next few Koala photos. Note: I am leaving them full size, rather than creating a tiled mosaic. Enjoy. Due to the rain, I was dealing with minimal light and no flash, so the ISO was pushed to 25,000, hence some photos have some noise. 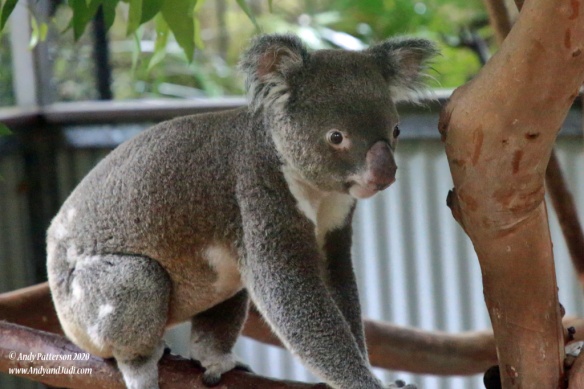 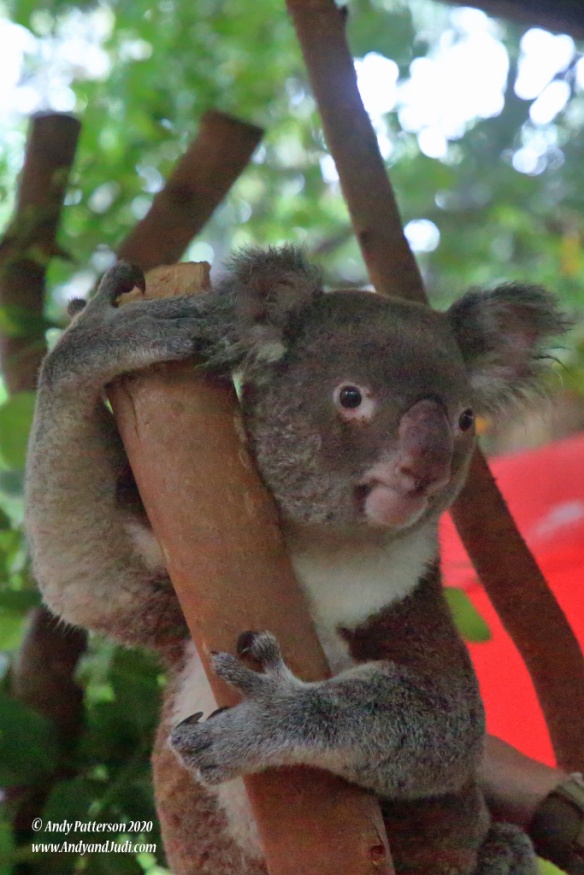 Since we couldn’t enter the pen for a pet, our guide implemented Plan B, taking us back to a covered area, where we didn’t get any wetter. Our guide then taught us how to hold a Koala, before going to collect one for us to hold. This was simply brilliant, as nobody was rushed and we all had the opportunity to hold one.

Guide arrives with a Koala

They also had a photographer, who took a photo of each couple holding the Koala. Photos were printed and we received them after lunch. The photo was included in the tour cost. 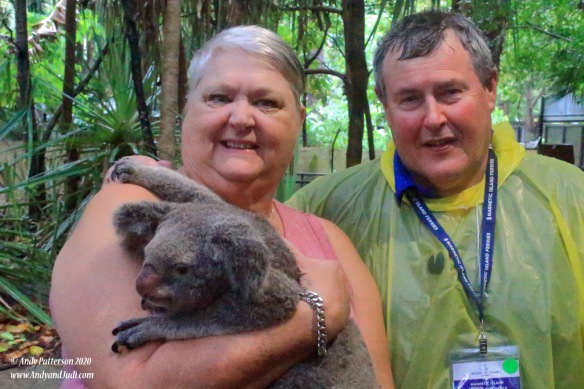 Koala hours of work are highly regulated, as they are limited to 1/2 hr a day, with the next day off.

Koala departing back to its pen

Next on the agenda were a couple of lizards – a bearded dragon and shingleback, which is also known as a 2-headed lizard, as it can transform to make it look like it has 2 heads, to confuse predators. Enjoy the photos. 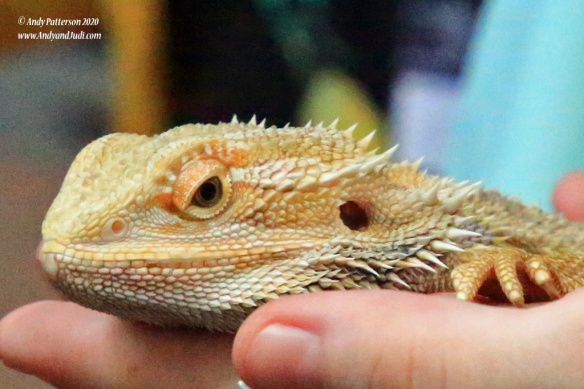 Shingleback held by our guide for petting opportunities

Our guide with the Bearded Dragon

She also brought out a snake, but we had no wish to get close to it, but some of the others were happy to have it around their neck and hold the head. Once the snake was safely stowed we walked around the village.

Normally, if you put your arm out the Cockatoo will jump on, but not today. Another casualty of the rain.

Crocodile, which has a narrow mouth 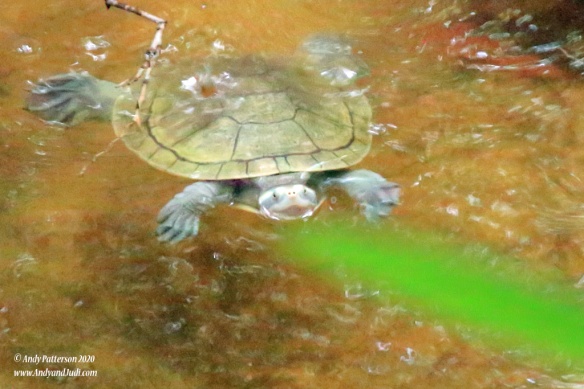 The babies are 3 years old, with their mother being the oldest female. At birth they were tiny, about the size of a 25c quarter, which makes them a favourite food of the Cockatoos. Therefore, they were removed and raised by the staff, until big enough to fend for themselves. 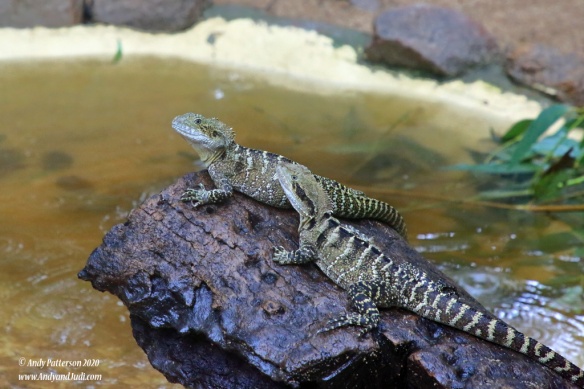 After a most enjoyable 90 minutes at the Koala Village, we returned to our bus for the journey back to Nellis Bay, for lunch at a local resort. It required a short walk up hill through the gardens to the restaurant, but it was definitely worth the effort. 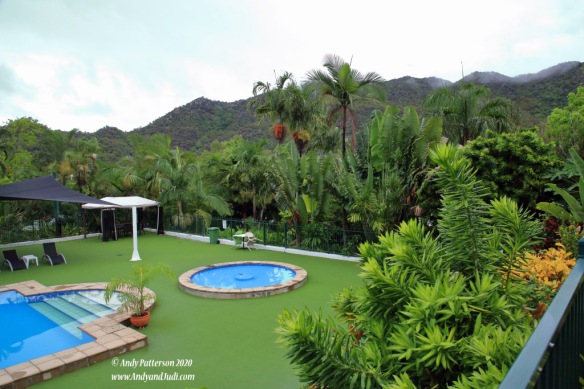 Looking down from restaurant balcony at the resort pool

For the afternoon, it had stopped raining and while still overcast, the skies were at least clear and much brighter. Departing the resort, the other bus went to the Koalas while we commenced our scenic island tour.

We drove to Horseshoe Bay on the other end of the island, which on a large bus is no mean feat on narrow, steep and winding roads. 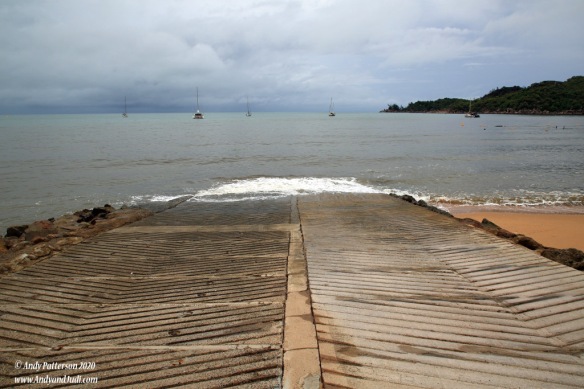 We drove down both streets around the bay, before parking so we had about 15 minutes to run around taking photos. 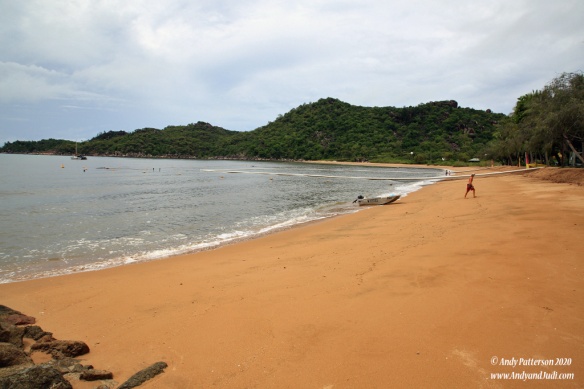 Once back on the bus, we re-traced our route back to Nellis Bay, stopping at Geoffrey Bay, where we drove along the old single track road to the old ferry ramp. 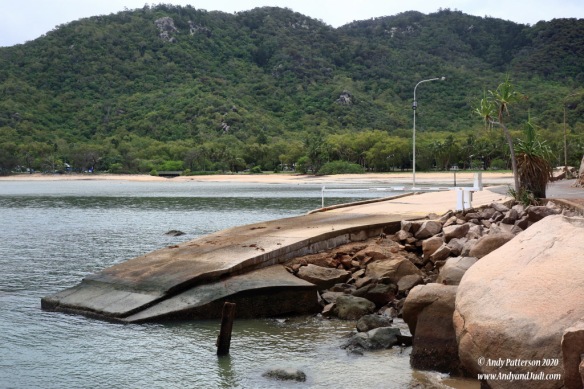 Original Ferry Ramp prior to new harbour being built

The road out to the old ferry ramp was a single track lane, which must have made for some interesting conflicts with vehicles leaving the ferry and others trying to make it.

At the end of the road we got off the bus to watch our guide feed the fish by throwing slices of bread into the water, resulting in a feeding frenzy. Didn’t really see any actual fish, just the splashes from them thrashing around the bread.

Slice of bread being devoured by the fish – anyone for swimming ???

After the fish feeding frenzy, we walked along a track and wow, we spotted a Rock Wallaby. It was originally up on the rocks, but no more than 8 feet away from us. We all froze and got the camera shutters snapping. 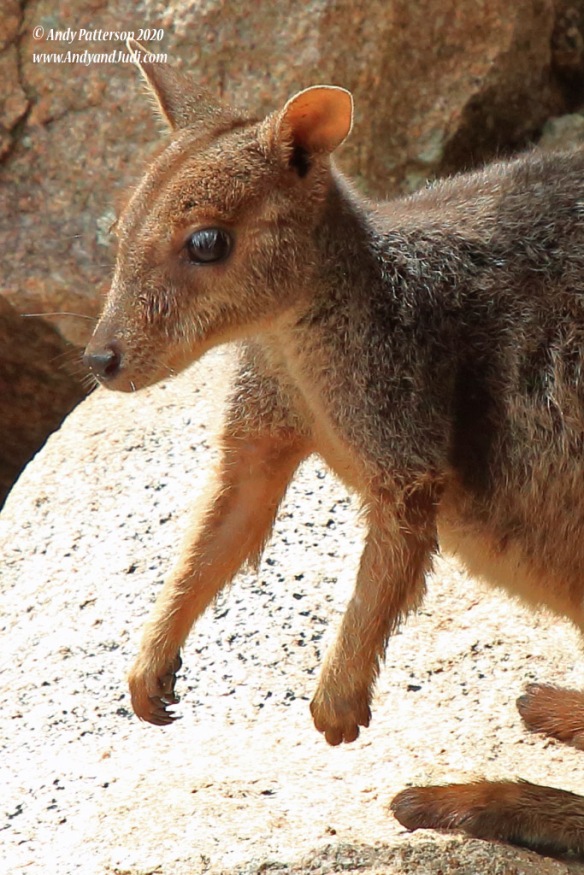 After a few minutes he jumped jumped down onto the path, but stayed close to our group. 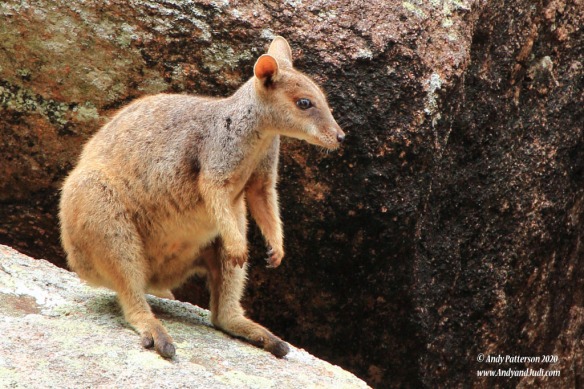 Rock Wallaby just before he jumped down to the path

Sadly, there is always one that doesn’t listen to the instructions about not feeding or touching the wild animals. Fortunately she still has all her fingers.

Apparently the morning group were not so fortunate, as the Wallaby wasn’t out when they visited. Once we were back aboard, we continued our scenic tour, stopping at the Nelly Bay Habitat Reserve, where the guide showed us a collection of boards displaying native birds, trees, etc. He was very knowledgeable, expanding on the brief descriptions provided on the boards. 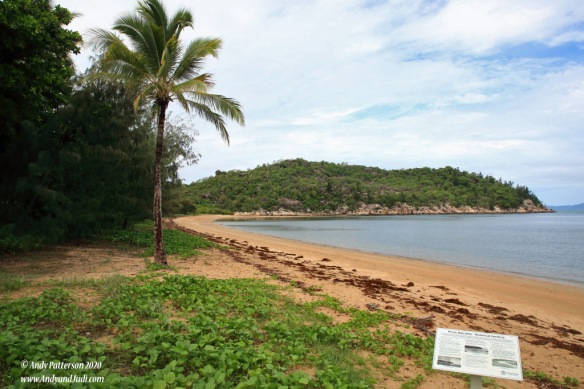 Next stop was at Picnic Bay, where we were dropped at one end of the beach and we walked along the fore-shore to the pier for pick-up. The fore-shore is a series of Banyan Trees, which are a haven for birds. 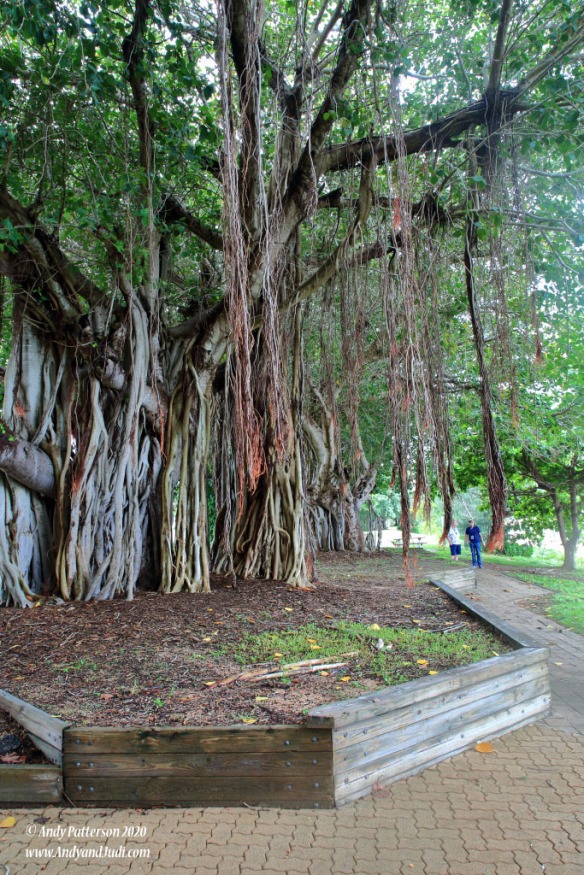 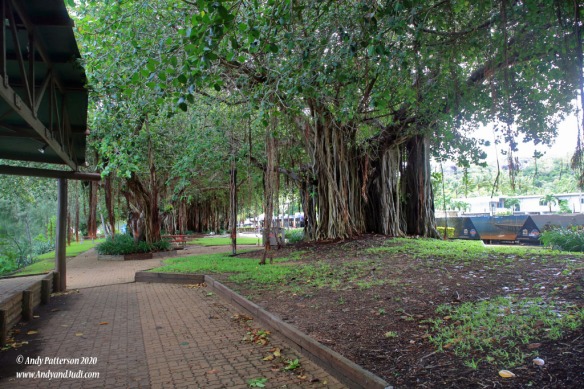 Looking up in the first tree we spotted a Kookaburra. 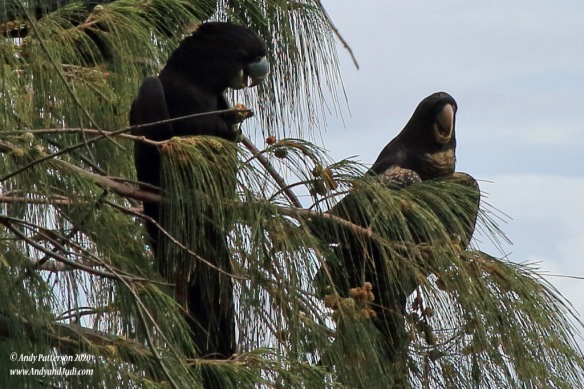 We returned to Nelly Bay where we had a short wait for the ferry, which was named “Arcadia”. This was the name of one of the great P&O steam ships, which I was originally scheduled to join in Sydney, way back in 1979. It was going to be her final voyage to the scrap yard. I ended up on a different ship, so I can now say 41 years later, I eventually sailed on Arcadia. 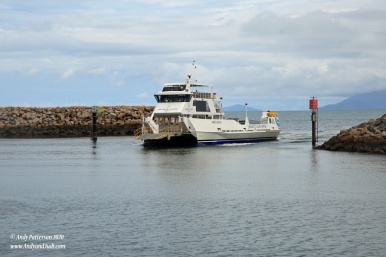 Once aboard, I climbed up to the top deck to capture a few photos of the harbour.

Departing the ferry terminal and harbour

The above condos were built on land that was blasted to provide the rock for the new harbour breakwater. 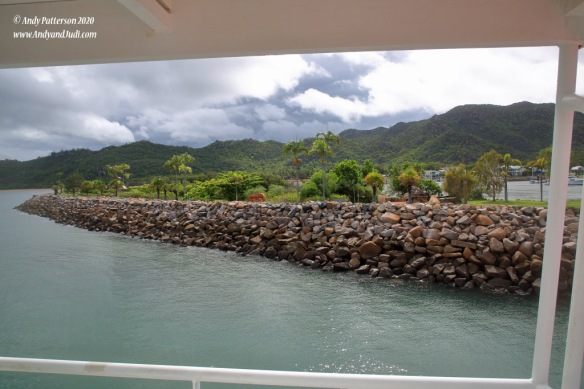 Without the rain and wind, the return trip was rather pleasant. Another few photos from the return cruise. 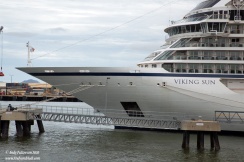 Outside the terminal, we were picked up by limo buses for the short hop back to the ship. Wow, what a great day and a most enjoyable tour.

In addition to the van from the gangway to the terminal, Viking also provided a complimentary shuttle bus into town. I recall reading it made 2 stops, but unfortunately, can’t remember where.

After dinner we attended the evening show with Clare Langan, who played the flute accompanied by the Viking Band. It was a most enjoyable show with some great music. After the show we headed to Torshavn for a nightcap or two.