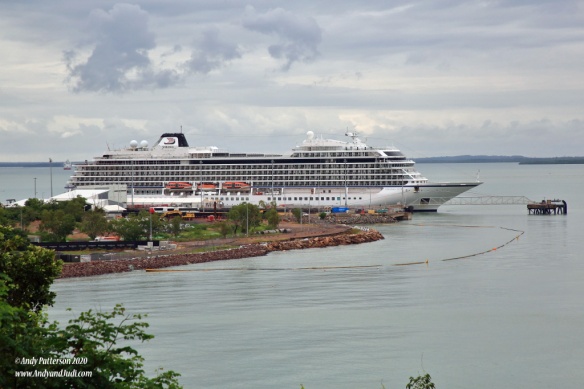 Our final few hours in Australia aboard the magnificent Viking Sun on the 2020 World Cruise, now called the “Magical Mystery Tour”. We had booked the included excursion to a local museum, but Judi slept in today, so I went for a stroll ashore, heading up to the town.

I might even have found a purveyor of craft beers around the waterfront.

Headed up to Deck 8 about 05:30, walking for just over an hour. Judi didn’t sleep well, so I decided to let her sleep-in and skip the included tour at 08:45. I opted for wandering around the town and waterfront. 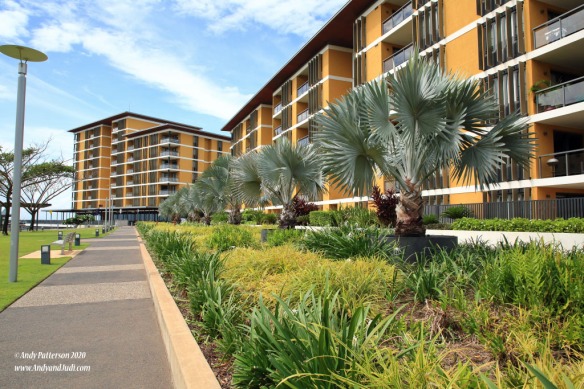 After a quick breakfast I returned to the cabin, grabbed the backpack, some water and the camera, and headed ashore by 08:45. Departing the terminal, I took the harbour walk to downtown, which is a covered walkway located just offshore, in front of the condos. 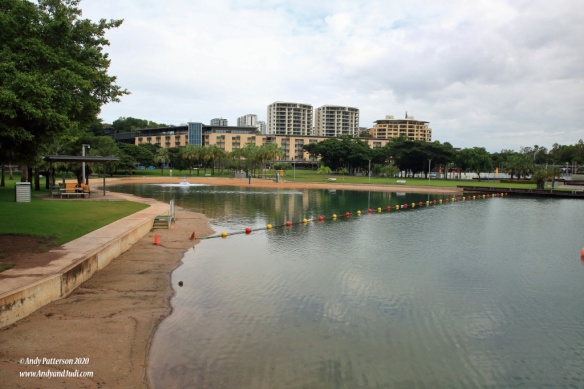 Salt water man-made beach that is safe for swimming

The walkway ended by the condos, which opened to a huge public area with 2 beaches, lawns, kids playground, kids splash pool and an aquatic centre. 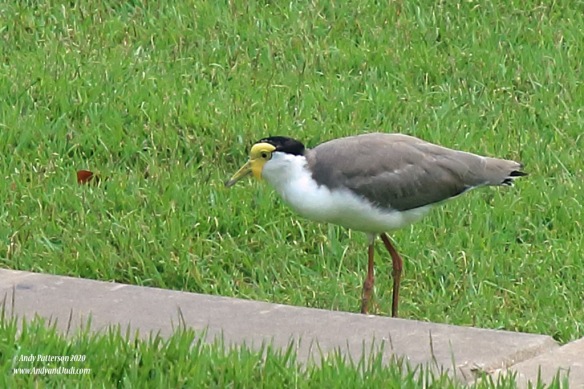 Masked Lapwing walking across the grass

At the inshore end was a hotel and multiple cafes, restaurants and a pub specialising in craft beer. Fortunately it didn’t open until 10:00, so I headed to the lift for the trip up to the Skybridge to downtown.

View of the condo and public spaces from Sky Bridge 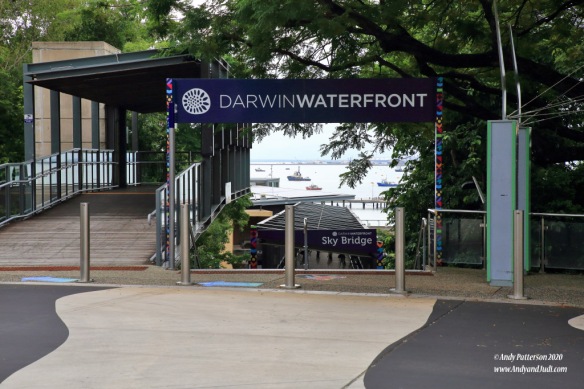 The Skybridge crosses the roads towards downtown, then you have a short flight of stairs to reach the top.

The Administrator’s House started life as the Court House and Police Station, with the original structure built with timber in 1870. In 1883, it was re-built with locally mined stone and Cypress Pine. It was the Northern Territories first Court Building, which also housed the Police Station and cell block. 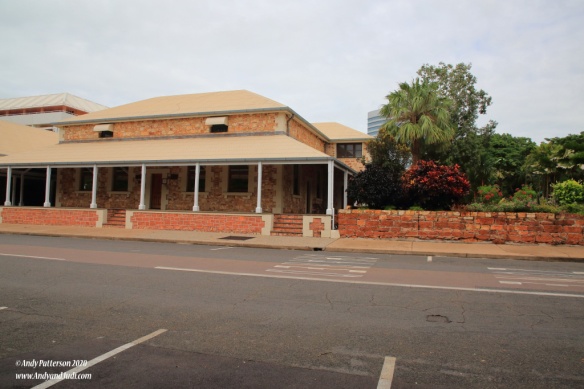 In 1942, it escaped damage during the Japanese Air Raids, so was taken over by the Navy as Naval HQ. The Navy retained the building until 1974, when it received extensive damage from Cyclone Tracy.

The Government commenced renovating the ruins in 1981, restoring it to the original Court House and Police Station. It is now the Office of the Administrator of the Northern Territories.

The above memorial celebrates the 100th anniversary of:

I continued walking along Esplanade, seeing the following buildings, then the Bi-Centenary Park and ANZAC walk. 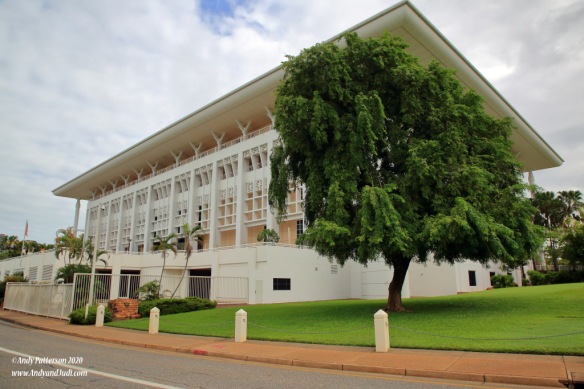 Built in the early 1870’s it is the official residence of the Northern Territory’s Administrator.

Located in Bi-Centennial Park, which runs along Esplande at the top of the cliff, it provides excellent views of the harbour.

Start of ANZAC Centenary Walk, towards the Cenotaph 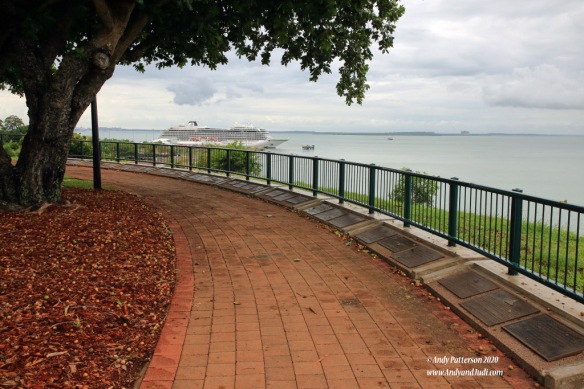 After walking through most of the park, I headed towards the CBD, as I needed to purchase a postcard for our grandsons.

Built in 1925, it was one of the first homes built with stone. I continued along Knuckley Street to the Mall, which took me back to the Waterfront stairs.

Ruins of the old Town Hall

The short flight of stairs leads to the Sky Bridge, which takes you across to the Waterfront District. Once I descended the lift to ground level, I headed to the Precinct Pub, where I enjoyed a pint of IPA. 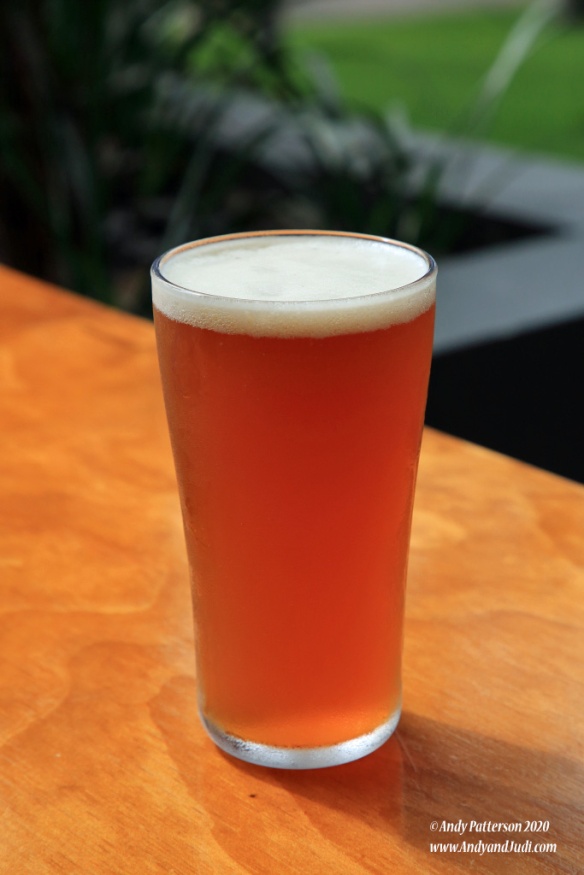 While rather hot and humid, it was pleasant sitting on the patio, watching kids playing in the wave pool and splash pool. After finishing my pint, I headed back to the ship to write and post the postcards to our grandsons.

As many were still ashore, we took the opportunity to catch up with the laundry, then headed up to the World Cafe for lunch. At 15:00, we headed down to the Theatre for trivia, where we again scored 11/15, but were 2 short of a winning score.

For dinner, we joined Ron & Allison in Chef’s Table for the British # 2 menu:

The wine pairings were very pleasant, especially the first Chardonnay and the Baileys served with dessert. After dinner, we headed up to the MDR, finding an empty table in our usual section. The table next to us were still eating the Main Course, which was a huge Rib Eye Steak, on the bone. It took us a few minutes to convince Erald, the waiter that we didn’t need a steak delivered to the cabin at 23:00. We settled for a couple glasses of Port.

Departing the MDR, we headed to Torshavn for a nightcap.