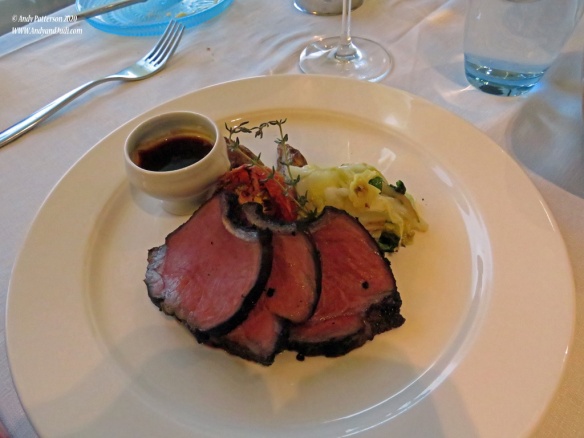 A new month starts today, so we have now been aboard this magnificent ship for most of January, all February and now into March. In fact, we are now just a couple of days from the mid-point, as we still have 2 months before arriving in London. Departing Australia yesterday, today we are steaming for Komodo Island, where tomorrow we will embark on a jungle walk, to see man-eating dragons.

Hot off the press – when going ashore tomorrow, the local authorities require everyone to wear a mask, at all time. We must protect the dragons from the virus.

NW’ly head winds of about 25 kts makes for blustery conditions on the outer decks, with the resultant wind on deck about 40 kts. In addition to wind waves, we also have a moderate swell of 4 to 6 feet.

Overcast throughout the day and I’ll discuss my early morning experiences with weather under activities.

Entering the MDR we said good morning to Neil, one of the chaps on our Trivia team. Zharko was leading us to a table further aft, but stopped and asked if we preferred to sit with Neil, as the next table was empty. Yet again, another example of how the crew on this ship go out of their way to make us happy.

We arranged to enjoy dinner with fellow RV’ers and bloggers Steve & Mona Liza – Lowes Travels. Check out their blog here.

We were sat at our usual table # 153, with excellent waiters Erald and Andrian. Both Erald and I are in mourning today, based on the UK football results, as both Rangers and Liverpool got beat. 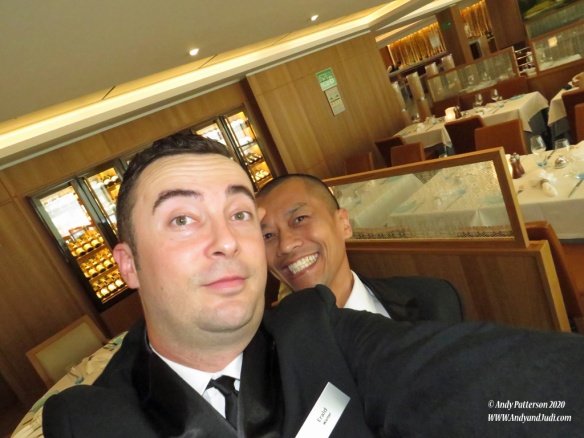 Although we have been aboard for 2 months, it’s been a couple of weeks since we have seen Steve & Mona Liza, so it was great to get caught up. This is where this ship really excels, as it has so many quiet nooks & crannies, you can go for weeks without seeing other pax.

Fortunately, I remembered the camera, so enjoy some food photos. 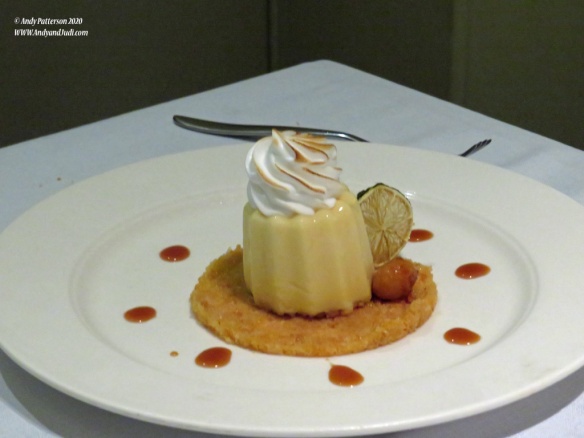 Great dinner and looking forward to enjoying a few more dinners with them before London.

Wow!! what a start to the day, as it really started with a bang and I mean that literally. Sitting at the desk working on photos, about 04:45, all around the curtains it erupted with light, which was instantly followed by a humongous clap of thunder. OMG, that must have been right above us. Headed up to Dk 8 about 05:30, and while walking I was treated to an almost continuous lightning show. However, this was mostly sheet lightning, so no more thunder. Just after 06:30, the sky turned really dark and angry, and on rounding the stern, I noted the horizon up ahead had disappeared and the wind had picked up – a squall approaches. Picked up the pace and barely made it to cover fwd of the pool before the heavens opened. Quite a combination of wind and rain. Headed up to Dk 9 for stretching, and on opening the outside door, I was assaulted by rain driving in sideways, so decided to retreat to the cabin for stretching this morning.

We headed down to the MDR for breakfast around 08:00 and I was relating my earlier experience with rain to Judi, who looked outside and noted the decks were already dry. Yes, the deck crew had already been around with squeegies, pushing the excess water off the decks.

Last night at Chef’s Table, the Chef was chatting with Allison and mentioned tomorrow’s class wasn’t full. So they convinced me to join them at Viking’s Cooking School, which is held every sea day in the Kitchen Table. The theme was Indonesian, as we made:

We split into two groups of 5, with my group responsible for the soup. Everything required is provided on the table, so we started prep of all the vegetables, herbs, spices and meats. With direction from the Chef, we also did most of the cooking. When everything is ready, the Waiter sets the table and the Chef plates everything. Excellent lunch. Next time, I’ll take the camera for a few photos.

After lunch, I worked on Darwin photos and the last 2 blog posts, prior to attending the 16:00 lecture – Resident Astronomer Charles Armstrong presenting, “Exploring Pluto and Arrokoth” Another great lecture, as he discussed how Pluto was discovered, including a slide showing the photos from 2 consecutive days that show a tiny light that moved position relative to the others. Also discussed how they struck Pluto off the list of planets and why he still considers it a planet. He also discussed the US mission to Pluto, which took 10 years to reach the planet.

We left the MDR after 21:00, so it was probably too late to get a seat for Bevan’s show, so we headed to the cabin, for the evening. Another splendid day aboard the Viking Sun.