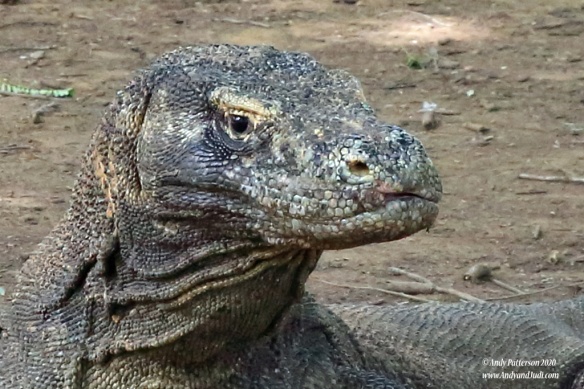 Today is a Noon arrival in Komodo Island, one of the highlights of the cruise for us – seeing the Komodo Dragons for the first time. Yes, this is one of the ports that neither of us have visited before.

The included tour is a guided walk of about 2.5 miles in the tropical heat and high humidity. It is noted as demanding, but even with limited mobility, Judi is signed up for the walk. Not all passengers survived the experience without assistance, but although exhausted, Judi was a real trooper and completed the walk under her own steam.

Read on for lots of photos of the island and it’s dragons.

Since we anchored at Komodo Island around 12:00, the Captain was unavailable to provide a Noon report. Since Noon yesterday we steamed the required 386 miles, reaching the pilot station at 11:00. During the morning we steamed generally NW’ly course, through the Savu Sea, between the islands of Sumba and East Nusa Tenggara. Abeam of Rinca Island, we altered to N’ly towards our anchorage on Komodo.

Generally overcast with the occasional squall and/or thunderstorm. Moderate NW’ly winds of 15 to 20 kts, with a low 2 to 3 ft swell. About 06:30, I noticed an approaching squall ahead and just made it under cover, fwd of the pool when the heavens opened.

We skipped lunch today, but were back in the MDR for dinner, sharing a table with Peter & Carol, fellow Pacific North Westerners, from down the I-5 in Seattle. 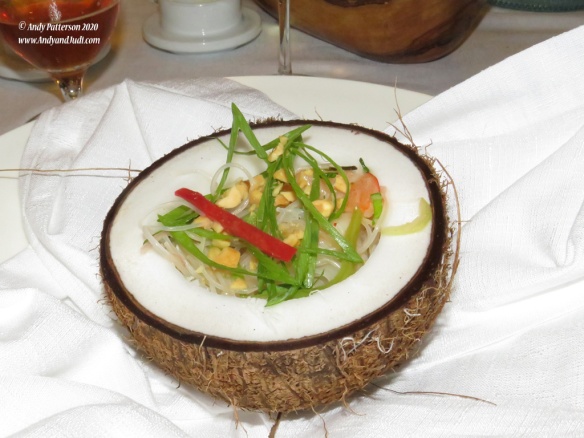 On many days, the dinner menu includes a “Destination Menu” section, which comprises a starter, main course and dessert. These dishes are typical selections from the country we are visiting. The above dish was an Indonesian starter from the destination menu. Have absolutely no idea what it was, but it comprised chicken, noodles, nuts and an amazing sauce, all served in the 1/2 coconut seen above.

I also tried the destination menu main course, which was prawns and 2 types of fish served in a taco shell. Didn’t have the same visual appeal as the starter, but still tasty.

My day started up on Dk 8 at 05:30, where I got a good hour of walking completed, until the rain curtailed my daily exercise program. About 06:30, rounding the stern, I noted the head winds had freshened, the sky had darkened and the horizon ahead of the ship had evapourated. All indicators of an impending squall.  Thought about heading straight inside, but figured I could make it to the covered area fwd of the pool, before the rain. Stepped up the pace, against the freshening wind and made cover with seconds to spare, when the heavens opened and wind picked up significantly. Rained so heavy, I headed back to the cabin for stretching.

The Dickin Medal, which is awarded to animals

After breakfast I headed to the Theatre for the 10:00 lecture from Bill Simpson, discussing the Dickin Medal. It was instituted during WWII and was awarded to animals in combat, as the equivalent of the Victoria Cross. It was awarded to Pigeons, horses, dogs and a cat. Brilliant lecture, with a few tears being shed.

Trivia was at 11:00, but the questions were predominantly US based. With 3 Canadians and 3 Australians, we scored only 4/15, which based on the questions was rather respectable.

The previous day we were advised that the Indonesian authorities dictated that we must wear masks while ashore, but today they also requested every passenger have their temperature recorded before going ashore. 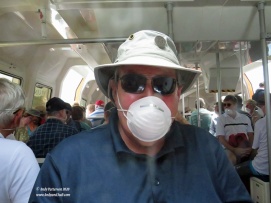 Departing the theatre, we were provided a dust mask and then had to walk past local officials, who took our temperature using an infra-red device on our forehead. Our temperature was recorded by one of the ship’s nursing officers. The official stated mine was 32.4 C, thinking I heard it wrong, I checked the readout and sure enough, that’s what it showed. OMG, they probably haven’t calibrated the devices. After that pointless exercise, we headed to the tender.

Viking Sun at anchor from the tender

Unlike Thursday Island, which was almost a 1/2 ride to shore, today only took about 5 mins to reach the end of the pier. 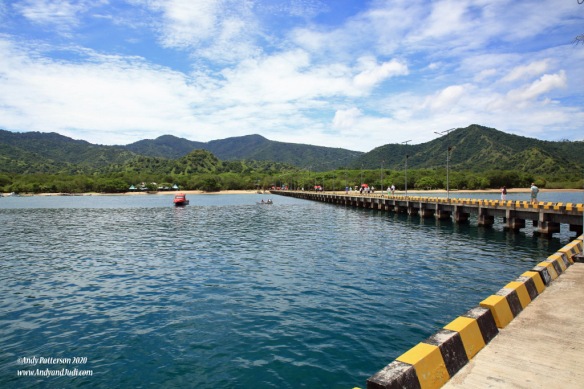 Once we climbed up the narrow steps on discharging the tender, we had a good walk along the pier to reach the shore. 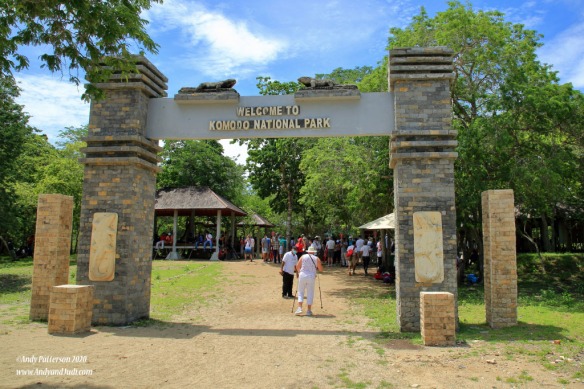 Entrance to the Komodo National Park 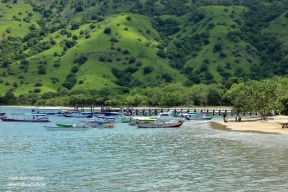 Beaches and shore at end of pier

Once onto the island we found our tour group leader – # 4 (Paul), who was providing an introduction when we saw our first Komodo Dragon, a baby that was running around the area where all the tours started. In addition to the guide, each group had 2 handlers, armed only with an 8 ft stick that ended in a fork.

Shortly after we set off, he stopped at a board that showed all the route options. We were on the long tour, which covered about 2.5 miles.

One of many deer living on the island

The deer are one of the dragon’s staple diet. Depending on the size of their meal, they only eat once every 4 to 6 weeks, as it takes almost that long to digest everything, especially the bones. 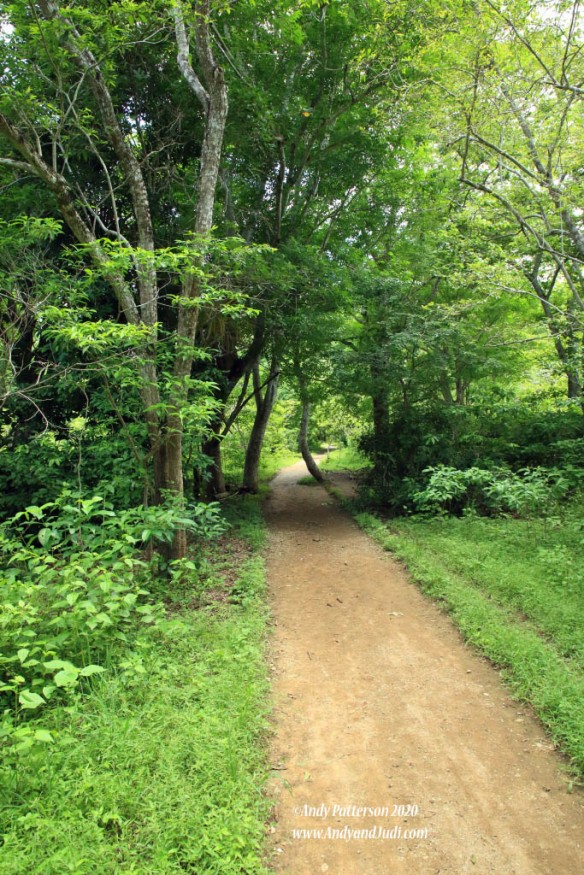 Well maintained path between the start and watering hole

The pace was really easy, with lots of stops between the start and the watering hole, which is where we found a number of Komodo Dragons. This is what made the hike through the heat and humidity worth it.

The one shown above was the first one we spotted and he was posing for the cameras, turning his head from 1 side to the other. Wanted to ensure everyone got a photo of his best side.

Believe I had over 200 photos, but managed to pare them down somewhat. Enjoy a selection of my Komodo Dragon photos. 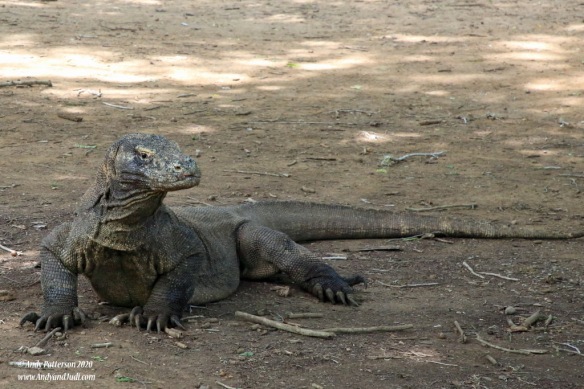 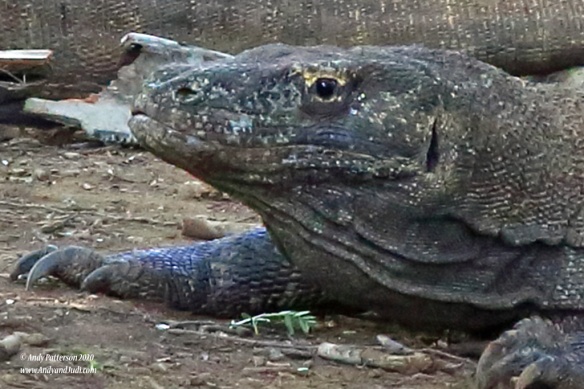 Just before we headed out, an inquisitive baby arrived on scene, who got rather close, so required some intervention from the handlers. 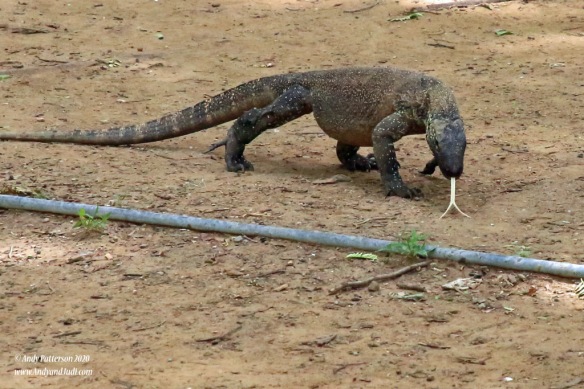 Baby closing in on our group

The handler gently placed the fork around its neck and guided it away from the people. 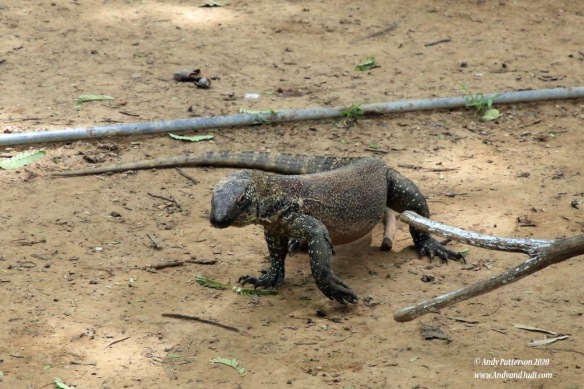 Baby dragon taking the hint and backing away from our group

The baby turned around and wandered off towards the watering hole.

Judi at the watering hole with dragons in background

Once group 5 arrived we departed the watering hole to continue our exploration of the island. Sadly, those were the only dragons we saw.

Our guide Paul showing us one of the many heaps of dirt, which is the nest. The eggs are laid and protected by the mother for about 2 months and then she leaves them. She returns just before they hatch and if she catches the babies, may eat them. The babies receive no parental guidance or protection, so must fend for themselves by climbing a tree.

A short distance later the guide stopped and advised we were about to complete a loop with incline and rough track. Anyone needing a break could stop and were protected by 1 handler, who stayed behind. Judi took a break, while I trudged onwards and upwards. 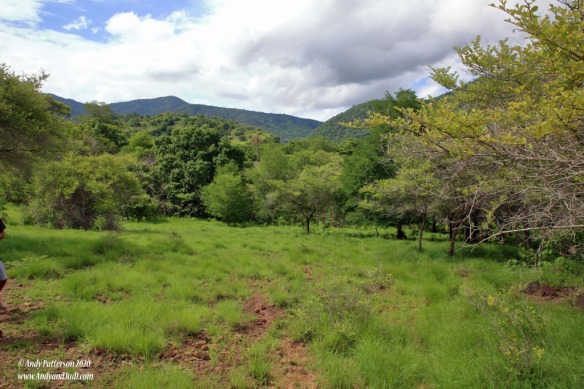 View from top of the hill

Our group heading uphill through the meadow

The additional loop took about 25 minutes and upon returning to the rest stop, we picked up the rest of our group and headed for the exit. This time they set a faster pace without stops, so Judi started lagging behind the group. I stayed with Judi, as did one of the handlers, armed with his stick. We took a slow, steady pace arriving at the beach when the group was ready to head to the exit.

Herd of deer camped out on the beach

The path out of the jungle lead to the beach, where we spotted the above herd of deer.

Beach with Viking Sun in the background

At the exit, they have it set up where you must run the gauntlet of local vendors, on both sides, flogging local wares & “Made in China” trinkets. Some of them can be rather pushy. We continued on, finding a seat for Judi over by the cruise staff, who provided some additional bottles of chilled water. Once Judi cooled down, we headed out the pier to the tender, for the short hop back to the magnificent and air conditioned Viking Sun.

Without any doubt, in the heat and humidity in the early afternoon, this can be a tough tour, but seeing the dragons made our day. Yes, we could have walked to the watering hole, snapped a few photos and then returned directly, but we would have missed the ambiance of the jungle and the associated sights and sounds. All in all, a great day.

Returning to the cabin, all clothing was soaked, so lots of extra water (gaterade) and showers were required before dinner.

After dinner, Judi headed to the cabin, while I went to the Theatre for “Journeys in Music”. The National Symphony Orchestra performed at London’s Cadogan Hall, specifically for Viking Cruises. The performance was video recorded and is shown on all ships of the Viking Fleet. I survived an hour, then headed back to the cabin.