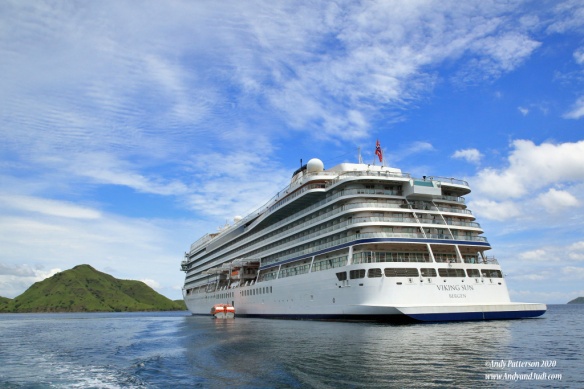 OMG! what a day, sitting off the port of Benoa in Bali (Indonesia). The information provided to the Captain yesterday that we would be cleared upon arrival has changed.

The political wrangling has continued throughout the night and we are now facing similar issues to those in Semarang.

Beven’s announcement count continues creeping upwards, so he is definitely due to receive the World Cruise Announcement “King” trophy upon arrival London.  He mentioned that Viking has an Executive from Basel ashore and is negotiating with the local authorities to resolve all issues, and to get us clearance to proceed ashore.

Being a port day, we had minimal activities on the schedule, so we spent a relaxing morning and afternoon reading Kindles, then headed down to the Living Room for the performance from the Viking Choir.

Just before 18:00, I returned to the cabin to change for dinner, noting a tender being lowered and heading ashore. Shortly afterwards, we heard the “Bing Bong” followed by Beven, who announced that Viking have resolved all issues, but the local authorities require yet another temperature check. This will take place during dinner service, so he mentioned that alcohol can increase body temperature.

We were in Manfredi’s private room, with a group of 12 for dinner followed by game night. None of us drank, requesting carafes of water on the table. First dinner without beer or wine in > 2 months. Believe a few hands were shaking, due to the alcohol reservoir running low. Just finished the main course, when we were informed that local officials were aboard, starting with Decks 7 & 8. Within 15 minutes, Deck 4 was called to the Theatre, so off we went. Yet again, the Theatre was perfectly set up to expedite the process, with Judi and I in the Theatre less than 2 mins. About 1/2 hr after we started, they were calling the crew.

After dinner we started game night with, “One Word”, which is a fun game. Each person gets to guess the answer from a number of clues. Each card has 5 single words, so without seeing the words, the person guessing picks a number from 1 to 5. This selects the word, which is then passed around to the other participants. Based on the “Word”, everyone writes down a 1-word clue. Any multiple words, hyphenated word and duplicates are discarded by the moderator, before the remaining clues are provided to the person trying to guess.

For my first guess, I received the following clues, in order:

Separating them into groups of fruits, meats and pizza, I guessed the common denominator was “Pie”, which was correct. It really is a fun game, especially when adding in multiple nationalities.

A few of us headed to Torshavn for a nightcap, but no results of the temperature checks were forth coming before we headed to bed.