Yesterday we received the shock news that we are going home, so the cruise is starting to wind down, Other than a very competitive Baggo match against Engineering, today was a rather quiet and relaxing day. Quite a contrast to tomorrow, which will be busy.

Note: above photo is one I found on the laptop when flying home yesterday that I hadn’t posted. It is from Dubai, so some participates had already left the ship in Dubai. This was after the Officers v’s pax match, which the pax won by almost 100 points.

We maintained W’ly and WSW’ly courses at a speed of about 10 kts, for arrival Gibraltar by Noon on April 10th.

With all others enjoying an Italian lunch after cooking class, I enjoyed a quiet lunch, with just me and the waiters. For dinner, we were joined by the Ship’s Doctor and Beven. The Doctor is an amazing lady, extremely well educated, with extensive experience in Trauma Medicine. She was a Professor and Head of Emergency Medicine at a major hospital at the age of only 27. She has worked/managed, as the Head of Emergency Medicine in major Trauma Hospitals in Italy, France, UK and USA. In addition, she was also a Member of the European Parliament for 1 term. A really amazing lady that speaks 5 languages, and so easy to chat with. now retired, she spends her time working on cruise ships. Aboard Viking Sun, our health was in very capable hands. 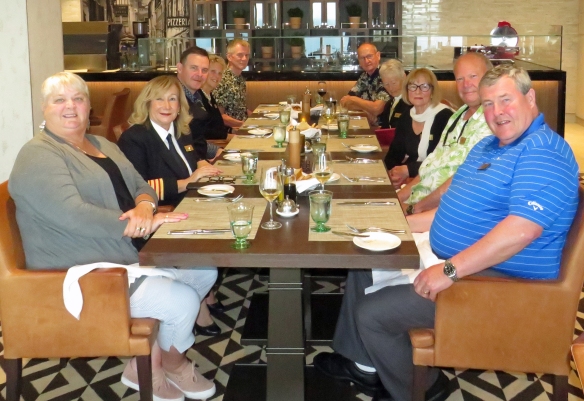 Can’t remember much about the main courses, but while I normally don’t venture into desserts, this one sounded interesting and most will agree it also looked good.

While it looked amazing, for me it was way too sweet, so I only tried a small piece, then reverted to my usual 6-grapes Port.

After breakfast and AM temperature checks, we sat in the Atrium with a pot of tea, until 09:30 when we headed to the Kitchen Table for Chef Roberto’s Cooking Class – Italian Cuisine.

We started with 7 participants, but Wally, Justyna, Judi and I had to leave after 1 hour, as we had a Baggo match against Engineering. Since I couldn’t eat any of the courses being prepared, I thanked Chef, but excused myself, not wanting him to have to prepare an entirely separate meal, just for me.

This was a big match, as it was against Engineering, so for me a win was essential. As many will know, I worked in the Deck Department and we always had some good natured rivalries with the engineers.

Round 3 is where we often excel and today our tail end bailed us out. With 4 throwers remaining we were about 500 behind. I missed with my first throw from the top, then placed 3 around the hole, all in blue, for 150/400. Bethan & Manny started the revival with each of them scoring 300, with 1 of the Engineers also contributing a score on our board. Beven was last up and with the last throw of the match we were 45 ahead. However, we were also about 20 points below the previous best ever score of any team. Had he thrown and it landed on their board, they get the points, so he discarded the last one, taking the victory and guaranteed entry into the semi-finals.

Judi spent a quiet afternoon in the cabin, while I headed up to the main pool. Only a couple of days left and this is the only pool I haven’t yet tried. 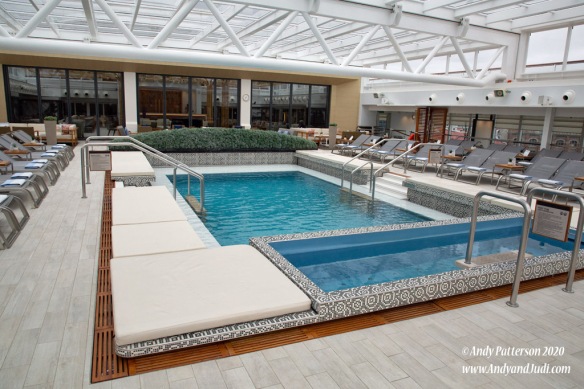 My plan was to try the Main Pool first and provided the water was warm, I would stay here, if not I planned to try the Infinity Pool. If that wasn’t warm, I was heading down to the spa. Like the weather, I don’t like cold water any more than cold temperatures.

The temperature was perfect, about mid/high 80’s. Within a few minutes, a number of the crew joined me in the pool. Had a great time, spent almost 2 hours treading water and chatting.

At 16:00, Judi & I headed down to the Atrium, as we were gathering for a video shoot that Beven suggested – the remaining 8 of us sitting and chatting to all those that had already left the ship. Unfortunately, Beven got tied up and we never did get time to do the filming. We had brainstormed, so had some great ideas to start our film careers. Sadly, it wasn’t to be.

We remained chatting after dinner until about 21:30, so after that we headed to the cabin for our nightly sit on the balcony watching the stars. We so missed this part of cruising, when it was so cloudy the first half.