The Life and Times of Andy & Judi 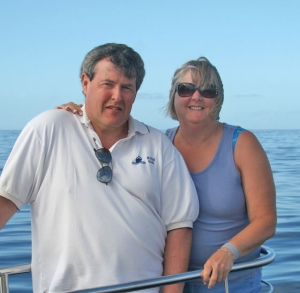 Welcome and congratulations on finding the Love Boat couple’s travel blog and checking us out. You may ask, did you guys really meet or work on the Love Boat? Basically – yes, so read on for the scoop.

SS Oriana the P&O cruise ship that brought us together

We are Andy & Judi and we met on the cruise ship SS Oriana in December 1977, during a voyage from Vancouver to Sydney. Andy was a fledgling trainee officer, or cadet and Judi was one of the many young Canadian passengers that boarded in Vancouver. Romance upon the high seas, a P&O cruises tradition, long before the Love Boat aired on TV. We had kept in touch, and in December 1979 when Andy left the Island Princess in Los Angeles, rather than returning to UK, he invited himself to Vancouver for Christmas. Things moved rather quickly from then, within 3 weeks we were engaged and in 6 months it was husband and wife. Who said whirlwind shipboard romances don’t last, as we reached 40 years in July 2020 and still going strong.

With both children happily married and moved out, we have enjoyed the empty nest life style of more disposable income and consequently more travel. 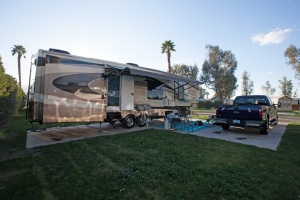 Now in retirement, we are seriously afflicted by the travel bug we experienced when younger, but was rather subdued during the child rearing years. In planning for retirement we purchased additional timeshare credits with Worldmark, so we now have about 6 weeks per year and purchased a Redwood 5th wheel to enjoy the RV’ing lifestyle. In addition we cruise regularly, previously with Princess, but now with the small ships of Viking Ocean.

Born in Scotland and had the travel bug from an early age. Initially wanted to be a pilot, but British Airways stopped training in the early 70’s and eventually shut down their training facility. In 1975, on completing high school, he implemented plan B and ran away to sea with P&O. He married Judi in 1980 and moved to Canada, although he continued working for P&O/Princess Cruises. The home life quickly beckoned, so he left cruise ships, in favour of working on the local ferries, quickly attaining command. Spent 28 years as a Captain, finally retiring at the end of 2012. Loves cruising, photography and still follows his football (soccer) team the Rangers FC from Glasgow.

As a Canadian Forces brat, she has lived all across Canada and also a few years in Germany, while her dad was posted overseas. She always had a love of nursing, so on finishing high school, signed up for the LPN course, which she completed in 1975. After a few years of experience as an LPN, it was onto the RN program, which she started just after our wedding in 1980. As an RN, she worked in a number of specialty areas, with the last 14 years in the Emergency Department of the local trauma hospital. In addition to cruising and travelling, her interests are reading, enjoying time with pets, family and various crafts.

Our yellow Labrador of 13 years and is the epitome of man’s best friend. On visiting the breeder we had a choice of 2 puppies, a female that was hyper and bouncing all over, or a male, who came over and lay on our son’s foot and promptly fell asleep. So you guessed it, we took the male and Duke entered our lives. What an unbelievably great companion and while he is a little slower, he is still going strong.

Update – after 13.5 years and his final trip across the country, Duke made his final vet visit in October 2016, and is now resting peacefully.

About 9 years ago we lost an incredible German Shepherd at only 7 years old and we both decided that she would be our last GSD. Well that only lasted a year, so 9 years ago we started looking for a new puppy. Kona is the result of that search and she has similar bloodlines to both previous GSD’s. Where Duke was quiet and laid back, she is definitely the opposite. Extremely high energy, but exceptionally smart, loyal and easy to train.

Stout…
Judi’s cat, as Andy was never brought up with cats and prefers the dogs. He is an indoor cat and while he doesn’t like to travel in the car, he is learning to travel with us in the RV. When on the move he hides in the bedroom and honours us again with his presence when we are set up and the slides are out.

We hope you follow our blog and enjoy reading about our wanderlust lifestyle, as we enjoy retirement to the max.

21 thoughts on “Love Boat Couple (About Us)”