Oriana & Truck by Kootney Lake, BC

We had tossed around ideas for retirement for many years, but about 5 years before the event we started firming up our goals and objectives for this phase of our lives. One of us brought up the subject of RV’ing, probably Judi, as Andy’s idea of roughing it or camping is a 4.5 star condo. Now that’s an interesting concept we both thought, and so the RV’ing seed had been sown.

Went to the next local RV Show in Abbotsford. Although a tiny show compared to Hershey we saw a good selection of MH’s, 5’ers and TT’s, quickly eliminating MH’s from the picture. So we compared floor plans of 5’ers and TT’s and decided that 5’ers, especially those with a front living room were our preference.

Following our research over the years, we developed the following specifications:

After years of reading magazines, researching the web and visiting shows, we started looking at the Montana with front living floor plan. Then about a year before we planned to buy we started visiting dealer lots to look at the various new models arriving. When driving through Oregon we stopped at a dealer in Redmond/Bend and saw a very nice Brookstone.

On returning home we visited a couple of dealers then drove out to Fraserway RV in Abbotsford. Nice young chap showed us a couple of Montanas and then asked if we had seen a Redwood. My response was, “Redwood, never heard of them”. Actually thought he had gone bonkers and was talking about trees.

From never having heard of Redwood to owning one in 2 weeks – interested, well read on.

When out chatting with the great folks at Fraserway RV in Abbotsford we saw our first Redwood, which for Judi was love at first sight. As soon as we walked in Judi’s face lit up, causing Andy to immediately check the price sheet. OMG – that’s more than our first house, as he tried to get the heart rate under control. After checking out the display model thoroughly, we read the brochure and noted a front living floorplan. When chatting with the salesman we mentioned a preference for the FL, but he indicated it was unlikely the dealer would bring one in as a floor model. Therefore, a factory order would be required. No problem, we replied, we can get the ball rolling in about 9 months when we actually want to buy.

Redwood from driver’s side

We received a call from Fraserway about 2 weeks later, surprise, surprise, a new 2013 36FL just arrived on the lot, so we agreed to go check it out on the weekend. The dealership was actually closed but the General Manager and salesman came in to show us the coach. Although no dealer prep had started, it was in great condition and just what we wanted. Had a pleasant chat with both of them and agreed this was exactly what we are looking for, but in about 9 months time.

The next evening we received a call from them, explaining that as a new Redwood dealer they were desperate for their first sale. Accepting the timing was early for us, they asked if we would be interested in moving our purchase ahead, if they stored it for free and got to a price point acceptable to both parties. After 5 mins chatting by phone we were the proud owners of a new 2013 Redwood 36 FL, subject to completing a pre-delivery inspection.

Redwood from the front

Our coach at Indian Waters RV Park in Indio, CA 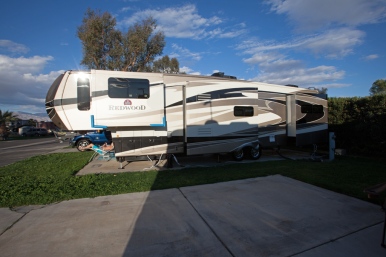 Redwood from driver’s side

Truck and RW at Indian Waters